Benni has the last laugh after AmaZulu's historic CAF feat

McCarthy heaps praise on his players 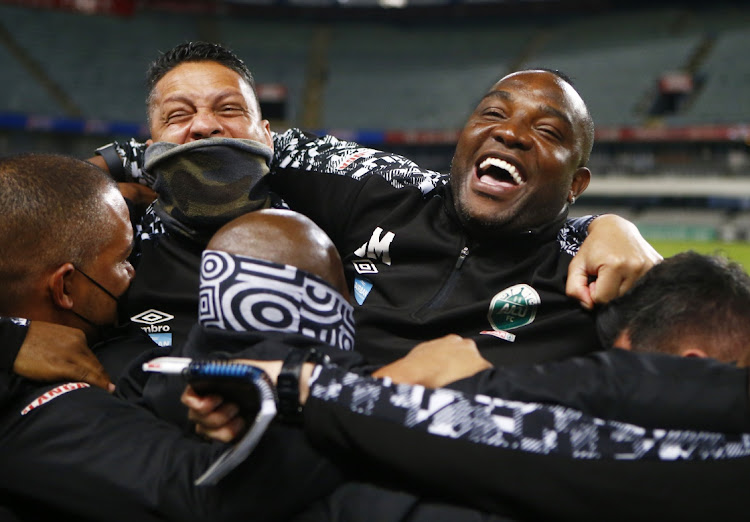 After his side secured a CAF Champions League spot, a happy AmaZulu coach Benni McCarthy aimed a dig at those who doubted his credentials and told them he is enjoying the last laugh.

When McCarthy took over at AmaZulu in December, he made a promise that the club would challenge for the league title.

That was met with doubts, with critics describing it as over-ambitious and won’t see that happening.

With Usuthu now guaranteed to finish second on the table even if they fail to beat Maritzburg United in their final match of the season tomorrow, McCarthy responded.

“I know there is one match left, but we are there. We achieved the unthinkable. When I joined, the president [Sandile Zungu] said he wanted a top-four finish, people said he was crazy," McCarthy told the club media department.

“When I joined, people said I was overrated, I was fired from Cape Town City, then I’m going to fail. I was not a good coach, so I wonder now who is laughing last.

“Let me give it to them quickly [striking a pose for the camera]. This is what a failure looks like.”

The 43-year-old coach was full of praise for his players following their historic achievement of reaching the Champions League.

Usuthu beat Swallows 1-0 on Wednesday to cement their place in the top two.

“I’m extremely excited for the players. I think they deserve it. They have been fantastic throughout the season,” he said.

“Yes, I know people say the last two games [against Baroka and Orlando Pirates] you didn’t get a win. We were off the pace, but when we have a 16-unbeaten run, of course, someway along the line, people will want to take you out and make things difficult for us and that’s what happened.

“But a champion is judged on how he wakes up and moves forward. We played against one of the toughest teams, a team that has 19 draws and one defeat.

“And we come and play them off the park and we could have added more to the goal-scoring charts.

“But we take the 1-0 win and it gives us the valuable three points that we needed and now we can go and see how everything unfolds and who will fight for number three and four.

“Champions League football is coming to the KwaZulu-Natal region. I’m proud of AmaZulu, players, the technical staff, and everyone who is associated with the club.

“We all deserve this, not just me. Everyone involved with the club has been amazing.”

The desperate scrap for the Premiership runner-up spot was decided in the penultimate round of the season after AmaZulu beat Swallows FC 1-0 to claim ...
Sport
1 week ago