Alarm for England as Alexander-Arnold hobbles off 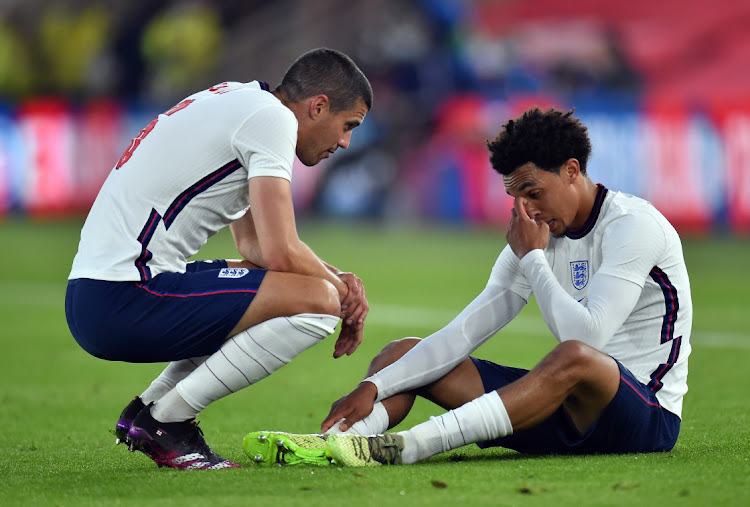 Middlesbrough - Trent Alexander-Arnold made plenty of headlines before Gareth Southgate announced his final squad for Euro 2020 and his inclusion could be short-lived after he hobbled off in Wednesday's friendly win against Austria.

Dropped for World Cup qualifiers in March, the 22-year-old Liverpool player had won a recall amid much speculation as one of four right backs in Southgate's provisional 33-man squad and then the final 26.

His first match back ended in obvious pain after some 88 minutes at Middlesbrough's Riverside stadium when he signalled he had pulled a muscle while kicking the ball with nobody near him.

With England having used up all their substitutes he lingered on the sidelines and was then booked for returning to the pitch without permission.

Medical staff helped him back to the bench as he covered his face with his shirt. ITV television speculated he had mouthed 'it's gone'.

"It's not a good sign to see him have to walk off as he did," said Southgate.

"He was walking past us there and he looked really uncomfortable," said the ex-Manchester United captain. "He was swearing quite a bit so it doesn't look good. Absolutely not. The guy looks in big trouble."

"You could see, even when he was covering his face with his shirt, he himself probably feels it's not going to happen for him," he said.

"You know instantly when you are injured and how long it's going to be. It looked like thigh or hamstring... if it's that, and we're talking about 11 days, there's no way he's going to be able to make that."

Netherlands defender Matthijs de Ligt has beat a retreat after saying one of the vaccinations available against the novel coronavirus could lead to ...
Sport
1 week ago

Chelsea defender Thiago Silva said he hoped the club's former manager Frank Lampard would be happy with the team after they beat Manchester City 1-0 ...
Sport
1 week ago

Manchester City forward Raheem Sterling and defender Kyle Walker have been racially abused on Instagram following the team's 1-0 defeat by Chelsea in ...
Sport
1 week ago

Chelsea's Kai Havertz repaid some of his huge transfer fee as his first-half goal sealed a 1-0 win for his side over Manchester City in the Champions ...
Sport
2 weeks ago
Next Article