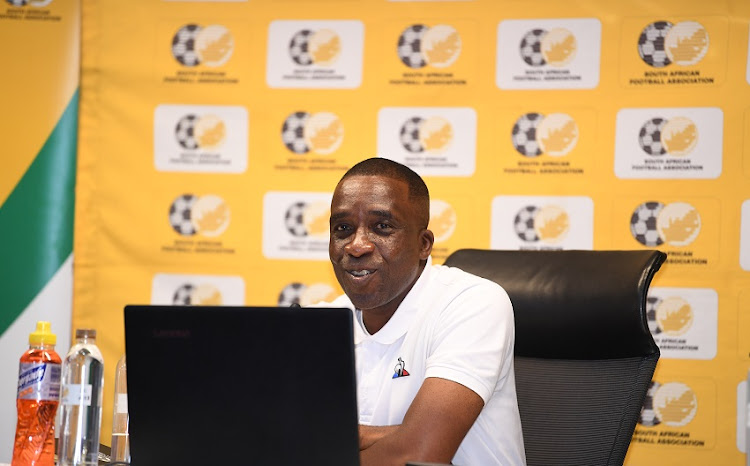 SA under-23 coach David Notoane during a media briefing at Safa House on April 15 2021 in Johannesburg.
Image: Lefty Shivambu/Gallo Images

SA under-23 coach David Notoane has been forced to alter his plans for the Tokyo 2020 Olympic Games after a mini tournament that was to be played in the United Arab Emirates in the coming days was cancelled at the 11th hour due to Covid-19 restrictions.

The South Africans were scheduled to face Brazil‚ South Korea and Argentina in a series of friendly matches from June 5-11.

Notoane’s side will now play two preparation matches away from home against Egypt on June 10 and 13‚ and the under-23 coach will then announce his final squad for Tokyo after the trip to the North African country.

“Unfortunately at the 11th hour government protocols couldn’t be agreed for us to be in the UAE in terms of Covid‚” said Notoane.

“So we moved swiftly to talk to our friends in North Africa‚ Egypt‚ and we managed to secure two games against them.

“We’ll be in Egypt from the 7th to the 14th this month to play those matches. The first match will be on the 10th and the second on the 13th.”

With the Premier Soccer League completing its league programme on Saturday‚ Notoane said he was able to make changes to his squad and add players he had to leave out for the now canceled trip to the UAE.

“You’ll see that the squad to Egypt is different to the one that was going to the UAE simply because at the time we announced the team we were scheduled to start on the 5th and the PSL had extended their calendar to end on the 5th this month.

“We’re now happy that with the PSL season ending on the 5th and with us departing on Monday‚ all the players will be available because the season would have ended.

“So with the dark side of losing the UAE trip there’s positivity now that the players we would have liked to have in this final assessment camp are available.

“It’s a squad of 25 players but of course there are those we didn’t select because they were selected in the Bafana Bafana team [to play Uganda in a friendly on June 10].

“After this camp we will then move to the finalization of our squad for Tokyo‚ which will be handed over to Sascoc.”

The SA team‚ which will be making a third appearance in the Olympics after participating in Sydney in 2000 and Rio de Janeiro in 2016‚ will be looking to go beyond the first round for the first time when they face hosts Japan‚ France and Mexico in Group A.

Egypt and Ivory Coast are the other teams that will represent the African continent in Toyko.

Japan will be SA's first opponents on July 22‚ followed by France on July 25 and Mexico on July 28.

SA Under-23 Team to play Egypt