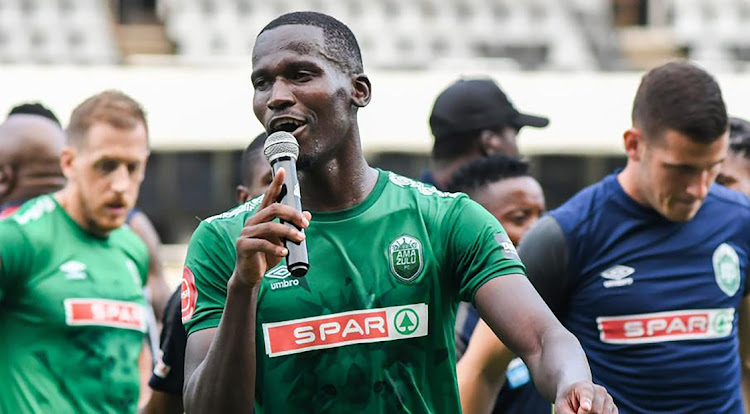 The desperate scrap for the Premiership runner-up spot was decided in the penultimate round of the season after AmaZulu beat Swallows FC 1-0 to claim second place behind champions Mamelodi Sundowns on Wednesday night.

The decisive strike came courtesy of Tapelo Xoki in the 51st minute of this crucial league encounter when he converted from the penalty spot to earn the home team a priceless win at the Kings Park Stadium.

The referee ruled that Given Thibedi had handled ball in the area and awarded the spot kick to the home side.

The result means that AmaZulu will be playing in the Caf Champions League for the first time in their history next season and incredibly, they have surpassed club owner Sandile Zungu's expectations after the businessman asked coach Benni McCarthy and technical team to secure a top four four finish when he appointed the former Bafana Bafana striker in December last year.

The Durban side's historic achievement also ensured that the hopes of the other sides vying for second place —  Golden Arrows and  Orlando Pirates — evaporated into thin air.

Pirates beat Baroka FC 2-1 at the Peter Mokaba Stadium, but their win did not matter in the greater scheme of things after AmaZulu wrapped up their match against Swallows in style.

Kaizer Chiefs rose from from the ashes to beat Arrows 3-2, ensuring the end of the race for Mandla Ncikazi's gallant charges.

Pirates started their match well aware that they needed to win in Polokwane if they were to keep up with the pace set by AmaZulu since the start of the year.

Baroka had top eight ambitions of their own and given what was at stake, the two sides were always going to exercise caution with so much tension in the air at the Limpopo venue.

After  several missed opportunities in the first half, the match suddenly stepped came alive when Denwin Farmer put the hosts in the lead following a set-piece on the stroke of halftime.

Pirates goalkeeper Wayne Sandiland came out of his area to deal with the free kick but after failing to connect with the curling ball, it rolled kindly to Farmer and he made no mistake to put the home team in the lead.

The media and fans have not been allowed into South African stadium since the outbreak of the coronavirus pandemic, but such was noise and excitement that was generated by the Baroka players that their celebrations could be heard some distance away from the Peter Mokaba stadium.

But their celebrations did not last very long as Pirates equalised courtesy of a set-piece of their own through Gabadinho Mhango deep in added time.

Mhango's goal was a thing of beauty as he fired a curling shot that took the slightest of deflections as it sneaked past bewildered Baroka goalkeeper Oscarine Masuluke and into the back of the net.

The two teams returned from break desperate for all the points, but they both could not find the crucial goal in those early stages of the second period.

Pirates continued to chip away in search of the crucial goal and they were finally rewarded when second half substitute Terrence Dzvukamanja powered home a thunderous header past Masuluke three minutes from time.

The Bucs will now reflect on what might have been as they will play no part in Africa's premier club tournament next season.