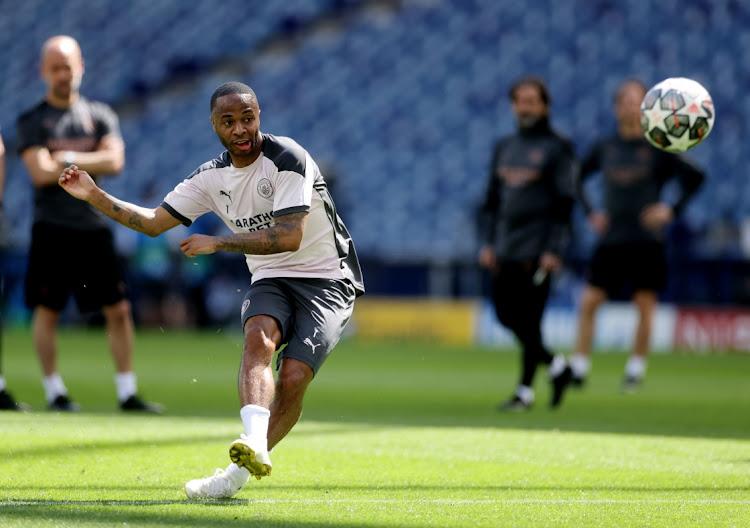 Manchester City's Raheem Sterling during training in Porto ahead of the Champions League final on Saturday.
Image: REUTERS/Carl Recine

Victory for Manchester City over Chelsea in the Champions League final in Porto on Saturday could have an impact well beyond sporting pride.

A first ever title in Europe's premier club competition would complete City's rise from Manchester's "second club" to England's top team and experts believe that could be the missing element in creating a truly global brand.

"The biggest trophy in club football is the Champions League and winning that would certainly have an impact on their brand, that is why you see clubs chasing it so hard, like Paris St Germain," says Hugo Hensley, head of sports services at Brand Finance.

PSG fell at the final hurdle last season, losing to Bayern Munich, leaving their Qatari owners still searching for that defining trophy that seals status in the game's elite.

Unlike PSG, City have had to compete with one of the game's biggest name clubs being just down the road.

When billionaire Sheikh Mansour bin Zayed al-Nahyan bought the club in 2008, there was no doubting he had invested in the second club in the city.

Manchester United were not just the most successful team in England they were a global brand attracting fans from across the world.

United had everything needed for football and commercial success - one of the game's top managers in Alex Ferguson, world-class players such as Cristiano Ronaldo and a brand already rooted in success was glowing from a third European Cup/Champions League triumph.

After a season in which Europe's traditional powerhouses stumbled, Saturday's Champions League final between Manchester City and Chelsea is a ...
Sport
1 year ago

City had a tradition of their own - they were one of England's top teams in the late 1960's - but as recently as nine years before the Abu Dhabi group took control, they had been languishing in the third tier.

On the field, things have changed dramatically.

While United have struggled for success since Ferguson's departure in 2013, City have won five of the last nine Premier League titles, including three of the last four.

In Pep Guardiola, the club has a manager widely viewed as the most innovative and effective in the game and they have a team packed with international talent, producing entertaining football.

That is all more than enough for the club's supporters of course, who know they are now the top dogs in their city and in the country.

But when it comes to being a global brand and international business, United still feature above City in most evaluations.

In terms of financial value, the Forbes and Deloitte rankings, place United fourth in the world and City sixth.

When it comes to the broader, brand value, the calculations from Brand Finance place United third and City fourth - Spain's Real Madrid and Barcelona are in top spots.

As United fans would be quick to point out, while they have won the European Cup/Champions League three-times City have never been European champions.

The only triumph for the Sky Blues in continental competition came in the now defunct UEFA Cup Winners' Cup 51 years ago.

"The peripheral fan who maybe only watches the Champions League latter stages, is going to be exposed to Manchester City, it brings a greater exposure to that wider audience," says Hensley.

"In terms of building the value of the brand, what that does for them is, it can increase their ability to sell sponsorship contracts, get sponsorships in more categories, and then build more loyalty among those sponsors, which is what that really branded aspect of the business is about," he said.

United still generate around £100 million more than City in annual revenue and they would also point to a greater global digital reach which increasingly drives their sponsorship deals.

A Champions League triumph for City would come at a bad time for United whose American owners, the Glazer family, are facing protests from some fan groups while the team are smarting from losing the Europa League final to Spain's Villarreal on Wednesday.

Victory in Porto might not catapult City above United in financial and brand terms but it would certainly move them much closer.

"It will help them close the financial gap. In terms of global branding they are still some distance behind United, Madrid, Barca, Bayern, Juve and, probably, Liverpool," says football finance analyst Rob Wilson of Sheffield Hallam University.

"They have too little history but they are certainly on an upward curve - and a Champions League win will undoubtedly accelerate things".

Guardiola a true believer in 'false nine' ahead of final

It is a term that once puzzled pundits and upset traditionalists but Manchester City manager Pep Guardiola says the 'false nine' brings out the best ...
Sport
1 year ago

Bafana Bafana attacker Percy Tau has vowed to fight for a starting place at Brighton and Hove Albion after playing less than he would have liked in ...
Sport
1 year ago

England's Champions League race goes down to the wire