Owner hopes club's centenary will be marked with display of trophies 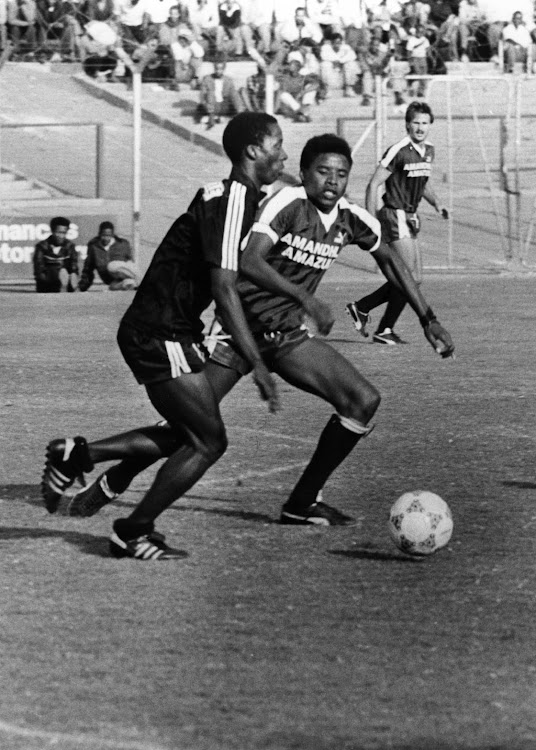 Moses Siwisa of Orlando Pirates, left, takes the ball from Muzi Khumalo AmaZulu during a clash in May 1987. New AmaZulu owner Sandile Zungu has vowed to take the club to the glory days with his 12-year plan which will culminate in the centenary in 2032. ©
Image: Arena Holdings

When Sandile Zungu declared he wanted nothing less than a top-four PSL finish after he acquired AmaZulu at the beginning of the season, many would have thought he was losing his mind.

After all, Zungu had purchased a team that had never scaled those heights since the PSL’s formation in 1996, with Usuthu battling relegation most of the time.

Ten months later, the astute businessman’s expectations of a top-four place have not just been realised, they’ve been exceeded as AmaZulu look set for a historic CAF Champions League place next season after an incredible run of form under Benni McCarthy’s stewardship.

“I know many people doubted us when we said we want to finish in the top four, and I expected that,” Zungu said in a recent webinar hosted by Sowetan.

“But I knew that when we made this investment, we had to set goals and show that we are serious. I was under no illusion. My experience in business taught me that the first few years at AmaZulu will be all about investment.”

Zungu’s webinar was aptly titled "The awakening of a giant", as he detailed his mission to make AmaZulu a highly competitive side who can eventually challenge for the league championship, rather than just survive.

He has set a 12-year plan that will culminate in Usuthu celebrating their centenary in 2032, by which time he hopes to have seen them lift major trophies. AmaZulu have not won anything since the 1992 Coca-Cola Cup, and last reached a cup final in 2010 when they lost the Nedbank Cup to Wits.

Of course, the success of the project will depend on whether the club can sustain the performance of this season, where McCarthy drilled Usuthu into a competitive side who embarked on a 16-match unbeaten streak to push Mamelodi Sundowns in the title run-in.

Zungu acknowledged he would have to keep his squad happy to stay where they are for some time. “Our players are happy with what we offer them, and it’s not necessarily money. I want them to know that they are valued while they are here with us.

"Of course, you may find agents trying to influence others to move elsewhere, but for every player we have, we get many others wanting to come join us because of the changing culture of the club.”

AmaZulu coach Benni McCarthy and the his goalkeeper Veli Mothwa were on Wednesday announced as March/April DStv Premiership’s coach and player of the ...
Sport
8 months ago

AmaZulu coach Benni McCarthy: ‘We will be playing Caf Champions League next season’

Benni McCarthy is already looking ahead to having his team participating in the Caf Champions League for the first time in their history‚ saying that ...
Sport
8 months ago
Next Article