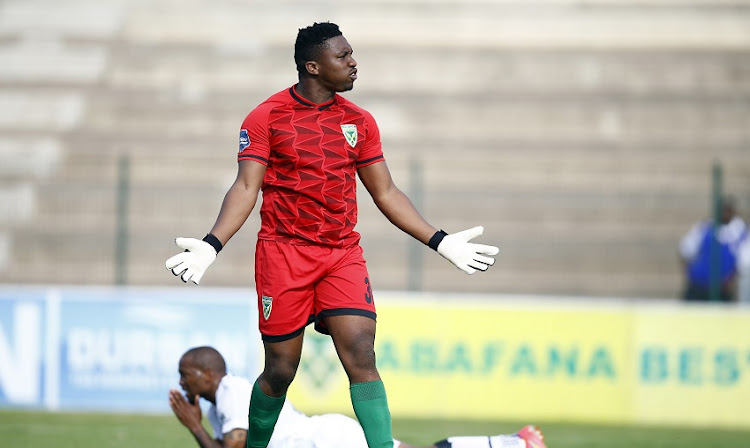 Lamontville Golden Arrows goalkeeper Sifiso Mlungwana has opened up about the deflating disappointment he felt after he found out that he had been excluded from the provisional SA under-23 squad for Tokyo Olympic Games.

The South Africans will play against Brazil‚ Korea and Argentina in a camp that will be held in Dubai in preparation of the Olympics.

Mlungwana admitted he was gutted when he found out that he was not on the list of players travelling to Dubai.

"I think it's one of the challenges that I am supposed to face in life‚ as long as I can strengthen my football career. It's a once-off thing [being snubbed]‚" he said.

The 24 year-old keeper has vowed to keep on working hard and try to impress new Bafana Bafana coach Hugo Broos.

"It's not the end of the road.

"I can still push to be selected in the senior national team. I was very disappointed [after I was not] selected [by the SA under-23 coach] but‚ it's not the first time with me‚ so there's nothing I can do. I will look forward to my future."

Mlungwana‚ who joined Arrows via their MultiChoice Diski Challenge side in 2018 from the UKZN Varsity football team‚ said he is thrilled to be playing for Arrows.

"I am really honoured to be playing for Golden Arrow‚" he said.

The keeper started in 28 league games this season after ousting seasoned shot-stoppers Nkosingiphile Gumede‚ Edmore Sibanda and Maximilian Mbaeva. This turn of events signifies Mlungwana's talents between the poles.

The fast-rising goalie has showed that he is very strong in the air‚ is good in one-on-one situations and communicates well with his back-line.​

He commended the support he has received from the club's goalkeeping department‚ revealing that they are the reason behind his success.

"It's my first full season playing in the Premiership. I am really happy and I want to thank my brothers in the goalkeeping department‚ the likes of [Maximilian] Mbayeva‚ [Edmore] Sibanda‚ Nkosiphile Gumede and our goalkeeper coach for being supportive and pushing me‚ " he said.

"I am really happy because it's one of the goals I set when the season started. To be nominated shows that I have worked very hard and it is now paying off‚" he said.

"I am happy for myself that I managed to push this far‚ especially for the fact that it's my first season. It shows that I am doing a great job and I [want] to do more."