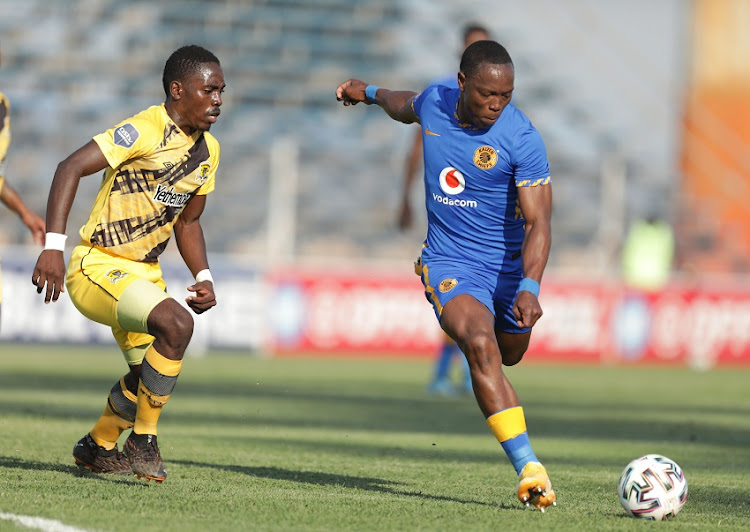 Philani Zulu of Kaizer Chief challenged by Tiklas Thutlwa of Black Leopards during the DStv Premiership match between Black Leopards and Kaizer Chiefs at Thohoyandou Stadium on May 26, 2021 in Polokwane, South Africa.
Image: Kabelo Leputu/BackpagePix/Gallo Images

Last-placed Black Leopards clawed a vital three points in their relegation battle that could provide them a DStv Premiership lifeline, their 2-1 win on Wednesday greasing the tracks for Kaizer Chiefs’ continued slide towards their worst-ever finish.

Chiefs coach Gavin Hunt’s 900th professional match as a head coach passed inauspiciously as Leopards had all the fight at Thohoyandou Stadium. Amakhosi, seeking to improve on the 11th place they entered the game on, again were unimpressive playing in spurts. Chiefs' worst two league finishes were in ninth place.

The Soweto giants started brightly enough with Leonardo Castro’s 10th-minute strike putting them ahead. But again it proved a false start in a season that has followed that nature, right wing Tiklas Thulwa’s strikes in the 45th and 64th minutes handing maximum points to desperate Lidoda Duvha.

Leopards (22 points from 28 games) clawed to within three points of second-last Chippa United (25 from 28) with two games remaining to provide a spark of hope for co-coaches Morgan Shivambu and Mongezi Bobe’s men.

Hunt had Njabulo Blom suspended and Dumisani Zuma injured but that factor was not enough to explain another disjointed performance in the domestic annus horribilis for the 2020-21 Caf Champions League’s shock semifinalists.

Given the stakes for both teams neither bench would have been too pleased at entertaining, open nature of the game. Leopards, though, could not be faulted for spirit and fight, and some neat football in build-ups too.

Chiefs got their breakthrough just after the start, Castro starting and finishing the movement. The Colombian’s flick-on from midfield was well directed to put Lazarous Kambole through to shrug off a marker too easily on the left, the Zambian squaring for Happy Mashiane to force a save from goalkeeper Jonas Mendes, Castro on hand to stroke the rebound past some defenders.

Amakhosi’s attempt to consolidate was not impressive, as they allowed Leopards freedom to play.

In the 34th Edwin Gyimah got up well to a free-kick but directed his header over. Five minutes later left-back Tsheamo Mashoene, influential pressing forward on his flank, crossed for Sanele Mathenjwa to head wide from a position where the playmaker should have hit the target.

Given such pressure, Leopards’ goal moments before the break came as no surprise. Left wing Tumelo Khutlang teased Erick Mathoho on the left edge of the area then fed Mashoene wide, whose square-ball beat the awkward lunge of Bruce Bvuma, allowing right-wing Thutlwa to finish into an open goal.

Chiefs were again the team starting brightly in the second half.

Happy Mashiane’s run and pass was touched on to force a stop from Mendes. Kambole earned a free-kick on the right of Leopards’ box and Nkosingiphile Ngcobo’s delivery took a deflection off Gyimah onto the upright. Bernard Parker’s drive was parried by Mendes.

Again, though, it was Leopards who settled into a rhythm, coupled with the urgency easily sourced through desperation.

They got their second from a movement across Chiefs’ box that ended with substitute Tebogo Makopela playing a one-two off Mathenjwa on the right to advance to the goal-line and chip inside, Thutlwa burying a header past Bvuma.