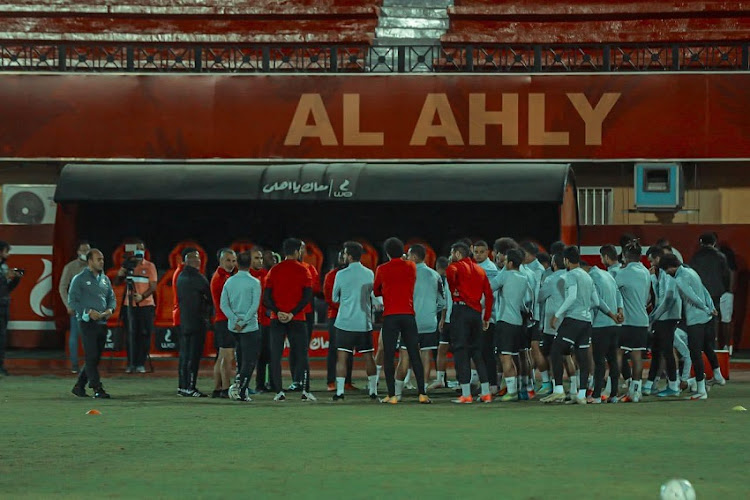 Al Ahly’s board of directors have sent a letter to Mamelodi Sundowns president Tlhopie Motsepe and highlighted the close relationship between the Egyptian powerhouses and the Pretoria club.

The North Africans acknowledged the letter of apology sent by Sundowns on Sunday afternoon after a section of the Pretoria club's supporters hurled insults at Al Ahly coach Pitso Mosimane outside of the Lucas Moripe Stadium on Saturday.

Mosimane was travelling in the Al Ahly team bus on the way to the venue to face his former club in a tense Caf Champions League second leg quarterfinal match when supporters clad in Sundowns colours tried to block the visitors' route outside the venue. It was one of the most embarrassing displays dished out by South African fans to a visiting team as the supporters also brandished placards insulting Mosimane and his family.

"Al Ahly highlighted in the letter the club’s appreciation to the apology of Mamelodi Sundowns’ board for the inappropriate actions before and during the game between Al Ahly and Sundowns on Saturday in the second leg of the CAF Champions League quarter-finals‚ which reflects the eagerness of Mamelodi Sundowns officials on portraying sportsmanship‚" the club said in a statement.

The Egyptians assured Sundowns that the club had no intention of lodging a complaint against Motsepe's side at the Confederation of African Football.

Al Ahly's reconciliatory approach is at odds with Mosimane's view of the matter as the outspoken coach indicated in a statement issued on his behalf on Monday that he was not impressed with Sundowns' apology.

The Sundowns apology raised eyebrows as there was no reference to Mosimane and his family‚ and simply said: “We therefore want to apologise to Al Ahly and those associated with the club.”

Mosimane and his representatives said they were not impressed.

“To this effect‚ as the management company of coach Pitso‚ we are disappointed that Mamelodi Sundowns FC have not apologised to him personally but issued a general statement apologising to Al Ahly and those associated with the team‚” the statement said.

Al Ahly clarified several other points‚ including that they have no intention of filing a complaint against their South African counterparts "as a sign of mutual respect between both clubs".

"Also‚ Al Ahly mentioned that having Dr. Patrice Motsepe [the Sundowns owner and the Caf president] at the top of the African football hierarchy causes Al Ahly to overcome any hurdles as Dr. Motsepe enjoys a strong relationship with Al Ahly and the club’s officials‚ noting that Al Ahly officials support Dr. Motsepe’s efforts to develop football in Africa."

Al Ahly said they would put things in their appropriate context and not allow the actions of a section of the supporters to affect the relationship between Sundowns and Mosimane.

The Egyptians said they appreciate having Mosimane as their coach and added that he deserved a better reception in Pretoria after leading Sundowns to numerous titles during his time at the helm.

Sundowns said in their apology on Sunday they would investigate the matter and root out the perpetrators of Saturday's disgraceful scenes at Lucas Moripe.

Many of the supporters who carried out the action have been identified on social media by other Sundowns fans who do not agree with their behaviour. It remains to be seen if Sundowns will take their advice and use the information as part of their investigation.

Al Ahly said they were happy that Sundowns intended to pursue the matter and take action against the supporters.

"The club appreciates the decision of Mamelodi Sundowns’ board to conduct an investigation over the actions that surrounded the game."

Mosimane master-minded the downfall of his former club as the Red Devils progressed to the semifinals of the Champions League 3-1 on aggregate after the two sides played to a 1-1 draw at Lucas Moripe Stadium. The Egyptians won the first leg 2-0 in Egypt.

They will now face Esperance in the semifinals in Africa's elite club competition next month.