Upset Mosimane vows to reveal all in memoir 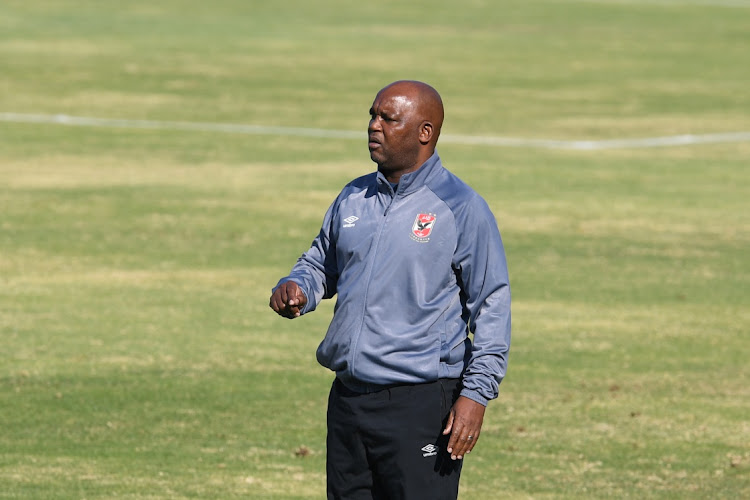 Mamelodi Sundowns have promised to investigate and take action after the behaviour of some of their supporters before their match against Al Ahly at Lucas Moripe Stadium on Saturday.

Sundowns described the behaviour as unacceptable after section of supporters were seen swearing at former coach Pitso Mosimane before the match after they accosted the Al Ahly bus.

The match ended 1-1, with the Red Devils advancing to the semifinals after a 3-1 aggregate victory.

“We received complaints by supporters of improper conduct and insults but Mamelodi Sundowns supporters should under no circumstances disrespect, insult or behave in the manner they did and must at all times stay true to our values and principles,” read a statement.

“We want to apologise to Al Ahly and those associated with the club. Sundowns will institute an investigation and appropriate action will be taken against those supporters whose conduct was improper and contrary to the values and principles that we adhere to.”

“They are just bitter because I left. I had to move on with my life. There’s more, I don't want to talk, the things that I’ve received before my match from SA, if I show you my phone, the correspondence I’ve received, e-mails I’ve received, they just can't let me go.

“And those e-mails are not from the supporters. They are coming from the main office. There is only one person who can allow for these e-mails to come. E-mails from lawyers, how I left, why I left. But I will save it for my book. I will write a book.

“I have kept it. They are after me, they don’t leave me. I thought I left a good team for the coaches to inherit the better team that I had. The best I ever had, but I thought I left in peace.

“But ever since I’m in Egypt, I’m never at peace, and I didn’t want to talk. But now that the situations are like this, later I’m going to write the book because the person doesn’t want to let me go. I said to myself, what else I should have done for this team to get respect? But it’s football, I understand.”

Pitso Mosimane on ex-employers Sundowns: 'If I show you my phone I will show you the things'

Pitso Mosimane reacted emotionally to the insults from a group of supporters who delayed the Al Ahly bus entering Lucas Moripe Stadium for Saturday's ...
Sport
1 year ago

Mamelodi Sundowns have apologised to Egyptian powerhouses Al Ahly after a section of the Pretoria club's supporters hurled insults at former coach ...
Sport
1 year ago

The EFF have come out in support of Pitso Mosimane after the former Mamelodi Sundowns coach was verbally abused by the club’s supporters in ...
Sport
1 year ago
Next Article