Pitso Mosimane responds to Mamelodi Sundowns' apology: 'This is not good enough' 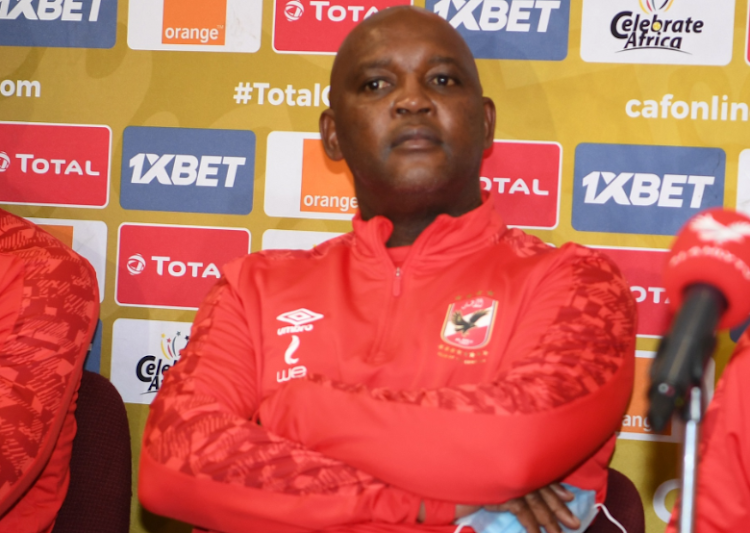 FED UP Al-Ahly coach Pitso Mosimane says Mamelodi Sundowns should celebrate the successes he has brought to the club instead of villifying it.
Image: Lefty Shivambu/Gallo Images

Tension between Pitso Mosimane and ex-club Mamelodi Sundowns heightened on Monday after the revered coach indicated that he was not impressed by the apology issued by his former employers on Sunday.

Sundowns issued an apology to Mosimane's current employers‚ Egyptian side Al Ahly‚ on Sunday after a section of the Pretoria club's supporters hurled insults at him on Saturday.

Mosimane was travelling in the Al Ahly team bus on the way to Lucas Moripe Stadium to face Sundowns in a tense Caf Champions League second leg quarterfinal match when supporters clad in the Brazilian's colours tried to block the visitors' route outside the venue.

The incensed supporters hurled insults at their former coach and his family‚ and also brandished placards with similar profanities.

But the Sundowns apology raised eyebrows as there was no reference to Mosimane and his familiy‚ and simply said: “We therefore want to apologise to Al Ahly and those associated with the club."

Mosimane and his representatives said they were not impressed after seeing the apology.

"To this effect‚ as the management company of coach Pitso‚ we are disappointed that Mamelodi Sundowns FC have not apologised to him personally but issued a general statement apologising to Al Ahly “and those associated with the team‚” the statement said.

"This is not good enough. The insults were directed at coach Pitso in his personal capacity and to his mother.

"We hope that the entire Sundowns family will continue to look at the success of coach Pitso as something to celebrate‚ not vilify."

Sundowns faced considerable pressure from observers and the nation's soccer lovers for failing to condemn their supporters' actions immediately after the ugly scenes.

The club eventually apologised to the Egyptians on Sunday afternoon and said an investigation would be carried out in a bid to bring the perpetrators to book.

But Mosimane's representatives were not impressed and said there are sections within the club that have never accepted the coach‚ even though he led the Pretoria club to a host of domestic and continental titles.

"This is regardless of all the successes he contributed to the club as the head coach of the club from December 2012 to September 2020 (7 years‚ 9 months) and 11 titles later.

"MT Sports Marketing and Management would like to state that the incident on Saturday‚ the 22nd May 2021‚ although deeply disturbing‚ is not an isolated one. For years‚ including the time that coach Pitso Mosimane was head coach at Mamelodi Sundowns‚ there were many known examples of disruption and efforts to usurp his position within the club.

"The events of Saturday‚ 22nd May 2021 where sections of the club’s supporters hurled abuse at coach Pitso and his mother‚ are confirmation of the grudge that some in the club continue to hold against him even after leaving the club.

"We trust and believe that this matter and the necessary truths that need to be revealed will finally‚ come to the fore in due course.

"As MT Sports Marketing and Management‚ our stance is that we will not allow for such callous bullying of our client."

Insiders told TimesLIVE that Sundowns have begun dialogue with Al Ahly in a bid to ease the tension‚ but is unclear if Mosimane will be part of those discussions.

Mosimane's abuse by the supporters sparked massive condemnation from across the country‚ with the SA Football Association (Safa) adding its voice to the outrage on Sunday afternoon.

Safa condemned the actions of the supporters and CEO Tebogo Motlanthe said they would bring the culprits to book.

The EFF joined the fray when they condemned the supporters in their own statement issued earlier on Sunday and said it would write to Safa and the Confederation of African Football to call on both bodies to fine Sundowns and its supporters.