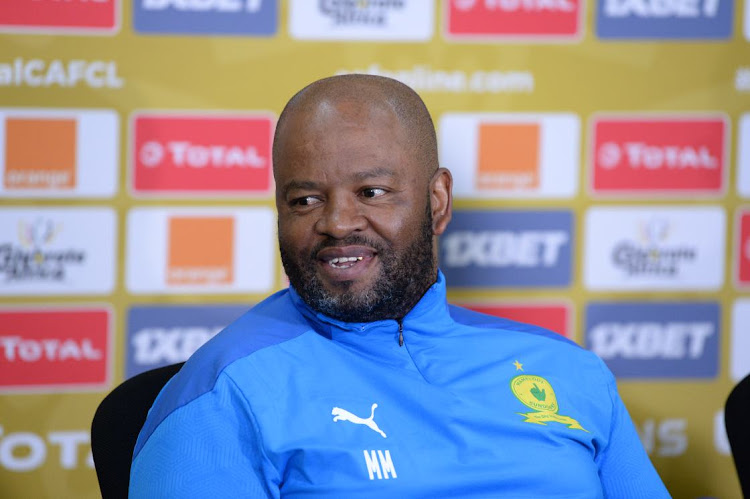 Mamelodi Sundowns co-coach Manqoba Mngqithi feels topping the group in the CAF Champions League and playing the quarterfinal first leg away is not an advantage, as many suggest.

Mngqithi was speaking after Sundowns were eliminated from the competition after their 3-1 aggregate defeat to Al Ahly.

Sundowns topped Group B and played their first leg away, and lost 2-0 in Cairo before they were held to a 1-1 draw at Lucas Moripe Stadium on Saturday.

The coach said the lesson they learnt from their elimination is not to think playing away first gives anyone an advantage in this competition.

“The lessons are a tough one because one of them we learnt in the quarterfinals of the Champions League is that when you are fighting very hard to top the group, which sounds like an advantage that you will go and play your first leg away from home, it is not always the best,” Mngqithi said.

“Maybe being the second [in the group] is always better because when you are playing your first match at home, the opposition, when they play the second game, is always going to be difficult.

“If you remember, even when we beat Al Ahly [in 2019], the first match was here, and we won 5-0. But when we went away, we struggled to beat them. Because of these back-to-back matches, when you start at home, it looks like you stand a chance of going through.

“If you can check, we topped the group, we are out. Simba topped the group, they are out. Maybe it's sending the message that this fight to top the group so that we can play away first is not always beneficial. Maybe we must try to fight to be at home first, where there are no permutations. You are just fighting to win the match, and the next game away, you are trying to consolidate what you have.”

Mngqithi also outlined the challenge they have faced in reaching the semifinals after falling short again at the quarterfinal stage.

“The truth of the matter is that in the past three seasons we had stiff competition in [the] quarterfinals. If you remember, we've played Al Ahly now three times in a row, and it’s proven to be one team. We've struggled to go beyond. We managed the first time around, and we had Wydad [Casablanca] after that,” he said.

Pitso Mosimane on ex-employers Sundowns: 'If I show you my phone I will show you the things'

Pitso Mosimane reacted emotionally to the insults from a group of supporters who delayed the Al Ahly bus entering Lucas Moripe Stadium for Saturday's ...
Sport
1 year ago

Pitso Mosimane's abuse by a section of the Mamelodi Sundowns supporters at the weekend has sparked massive condemnation from across the country‚ with ...
Sport
1 year ago

Al Ahly and Pitso just too good for Sundowns

Pitso Mosimane returned as the prodigal son and usurped Shadrach‚ Meshach and Abednego in charge of an Al Ahly displaying stoicism of biblical ...
Sport
1 year ago
Next Article