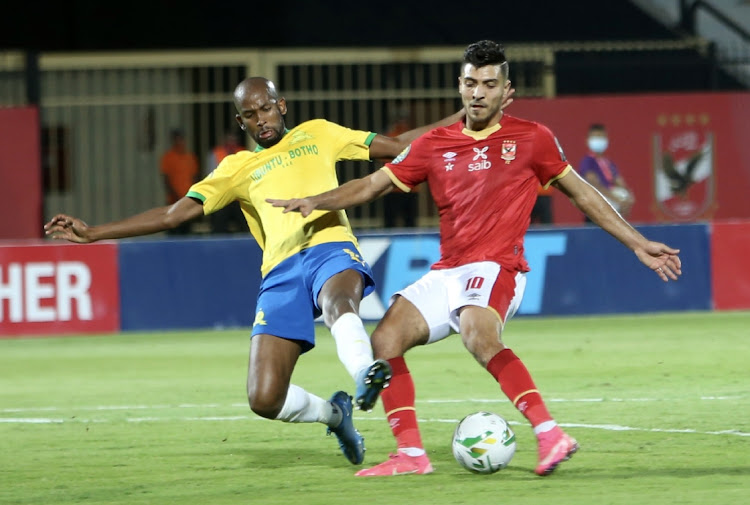 Mamelodi Sundowns defender Mosa Lebusa has promised nothing less than an attacking side as they look to overturn a 0-2 deficit against Al Ahly when they play in the CAF Champions League second leg at Lucas Moripe Stadium tomorrow (3pm).

Sundowns are planning to score two quick goals in the first half to put Ahly under pressure, and Lebusa said they would be going all attack from the first whistle.

“I think the second leg is going to be a different ball game. We have to give it our all. We have to attack and defend as well,” Lebusa told the media yesterday.

“We made it a little bit harder for ourselves in the first leg. We conceded two goals, we have ourselves to blame. But the first leg is done, now we are looking forward to the second leg and we have to work hard like the coach [Manqoba Mngqithi] said that if there is anyone who can do it, he believes it is us.

“So, hearing such words from the coach gives us that extra motivation, that extra push that we want to do better. We want to put the club into the Champions League semifinal.”

After Sundowns humiliated the Egyptian giants 5-0 at this stage of the competition at the same venue in 2019, Lebusa insists they are not looking to that as a reference.

Lebusa, who was on the bench when Sundowns won that game, doesn’t believe physiologically, it will affect Ahly tomorrow.

“A lot has changed after that game and we don’t talk about that. We are trying to live in the present and not in the past. I think that helps us as a team to move forward.”

The 28-year-old captain added that what he has learned playing in the continent is that they have to take their chances after they missed a lot in the first leg against Ahly and got punished.

“It is very different in the PSL, sometimes you make mistakes and you get away with it, while in the Champions League you have to be clinical if you get a chance.

“You make sure you use it because if you don’t, it will come back to bite you. Teams are more organised in the Champions League, and in the PSL you get away with a lot of things.”

Influential Mamelodi Sundowns midfielder Themba Zwane is in contention to take his place against Egyptian powerhouses Al Ahly in the highly ...
Sport
1 year ago

Pitso warns Sundowns still in it as Ahly jet into SA

'Two-goal lead means nothing'
Sport
1 year ago
Next Article