Chiefs fans hand over memorandum of grievances to Jessica Motaung 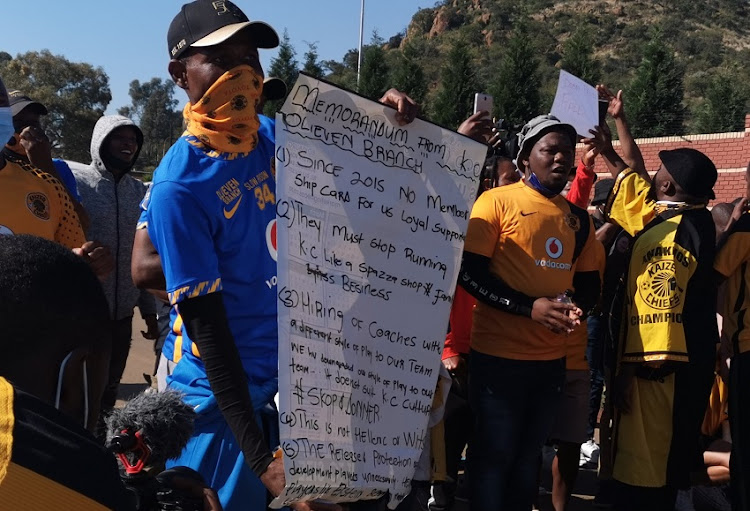 Supporters of Kaizer Chiefs marched to the club’s headquarters in Naturena on Friday to hand a memorandum to management expressing their dissatisfaction.
Image: TWITTER/AmaKhosiTV

Supporters of Kaizer Chiefs marched to the club’s headquarters in Naturena on Friday to hand a memorandum to management expressing their dissatisfaction with the under-performance of Amakhosi, and demanding better.

Between 50 and 100 supporters marched, and the memorandum was handed to Chiefs’ marketing director Jessica Motaung.

News and details of the march were circulated in the past week via social media and spread via the Twitter handles #KaizerChiefsPeacefulProtest #KaizerChiefsMarch and #KaizerChiefsProtest.

The turnout may not have been huge from supporters of a club that number in their millions. But a form of history was made as no top-flight team’s supporters in the Premier Soccer League era had ever put together an organised protest express their grievances to their side.

And some supporters who did arrive for the march said they had come from as far as the Free State.

Mohau Tlali (29), one of the organisers of the march, said the idea began among a group of the club’s supporters in December.

Kaizer Chiefs marketing director responds and addresses the marchers after a memorandum was handed to the football club's management at the team's Village in Naturena, Johannesburg on Friday, May 14 at the protest by supporters that was organised by means of the Twitter handles #KaizerChiefsPeacefulProtest #KaizerChiefsMarch and #KaizerChiefsProtest.

“Around December we met at a soccer tournament. But then we had to go out and research first because we didn’t just want to go there and strike,” Tlali said.

“So we took about four months to plan this protest. It was a group of us – I think we were less than 20 then, until we went to Twitter and got everyone here.”

Motaung, addressing the marchers, said: “We are welcoming you here in the spirit of Love and Peace [Chiefs’ slogan] because you are here because you are really passionate and love this team.”

She said she could not make promises but that the protestors’ demands and pleas had been heard.

An organiser reads out the memorandum that was handed to Kaizer Chiefs Football Club management at the team's Village in Naturena, Johannesburg on Friday, May 14 at the protest by supporters that was orgniased from means of Twitter handles #KaizerChiefsPeacefulProtest #KaizerChiefsMarch and #KaizerChiefsProtest.

The memorandum that was read out included demands that Chiefs sign better class players more consistently, start a women’s team, and show greater ambition trying to win a continental competition. Also that Amakhosi stop treating fans as commodities to whom merchandise is efficiently marketed and sold, but then the club not returning that investment by spending on success on the field.

Chiefs are in the midst of their sixth season without a trophy having previously gone at the longest only a single campaign without silverware. They are in 10th place in the 2020-21 DStv Premiership and in danger of a worse finish than their previous two worst positions of ninth.

An organiser of the #KaizerChiefsPeacefulProtest, Mohau Tlali, explains how Friday's march started by fans to the @KaizerChiefs Village in Naturena to hand a memorandum to management expressing grievances pic.twitter.com/FdG7slB6Z7

The #KaizerChiefsPeacefulProtest, where a memorandum of grievances was handed by supporters to @KaizerChiefs management, including Jessica Motaung, Kaizer Motaung Junior and Kemiso Motaung pic.twitter.com/c4qvrNFEHA

Not all the #KaizerChiefsPeacefulProtest marchers felt their message was well received by @KaizerChiefs. Moses Mukwevho said he felt Chiefs gave the protestors "empty promises". pic.twitter.com/nWJErL1adO

Some marchers in the #KaizerChiefsPeaceful protest marchers felt their message was well received by @KaizerChiefs. Charles "Njeza" Ledwaba said the club "heard our message" pic.twitter.com/9tWTZ71VIz

Jessica Motaung and Kaizer Motaung interact with the marchers at the #KaizerChiefsPeacefulProtest, where a memorandum was handed to @KaizerChiefs management pic.twitter.com/rgh0wSG0AH