GladAfrica leaders on course to earn slot in top flight 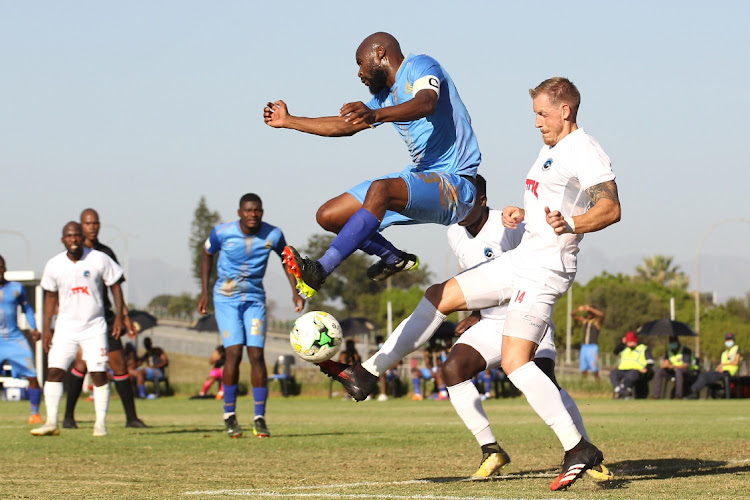 Royal AM captain Samuel Manganyi and Michael Morton of Cape United challenge for possession during the GladAfrica Championship 2020/21 match between Cape United and Royal AM held at Parow Park in Cape Town on 16 April 2021.
Image: Backpagepix

With just two games to spare in the second tier, Royal are on course to earn a slot in the top flight for next season. The side that is coached by Sazi Ngubane and Moeketsi Serame will face University of Pretoria at Tuks Stadium tomorrow, before wrapping up their campaign with a home fixture against Cape Town All Stars seven days later.

The 33-year-old Manganyi, a sturdy centre-back, is reluctant to count their chickens before they hatch, insisting they’re not home and dry yet despite being on 47 points, two ahead of second-placed Richards Bay, their provincial rivals.

“We have been working hard and the hard work is gradually starting to pay off. We still have two vital games that we still need to play. Winning those two games is the most important thing because that’s were we will know our fate. At this stage we haven’t achieved anything,’’ said the soft-spoken Manganyi.

“Yes, we’re top of the log but that doesn’t necessarily mean we are going to the elite league. The job is not over yet. We must stay switched on and continue to give our all in the two matches we still need to play.”

Manganyi has missed just one of Royal’s 28 GladAfrica outings, racking up two goals in the process. The powerful defender was previously on the books of Real Kings, the club Royal bought their status from at the start of the season.

The skipper attributed their resurgence to camaraderie.

“We’re a family here. We are always together as players and we also have a good bond with the management and technical team. I think that togetherness has played a big role in our meteoric rise as a team.”

Fixtures (all at 3pm on Sunday)

With wheels falling off for Richards Bay, who looked certain to clinch automatic promotion until losing their last two games, Royal AM are now hot ...
Sport
6 months ago
Next Article