Usuthu No 1 wins player of the month award 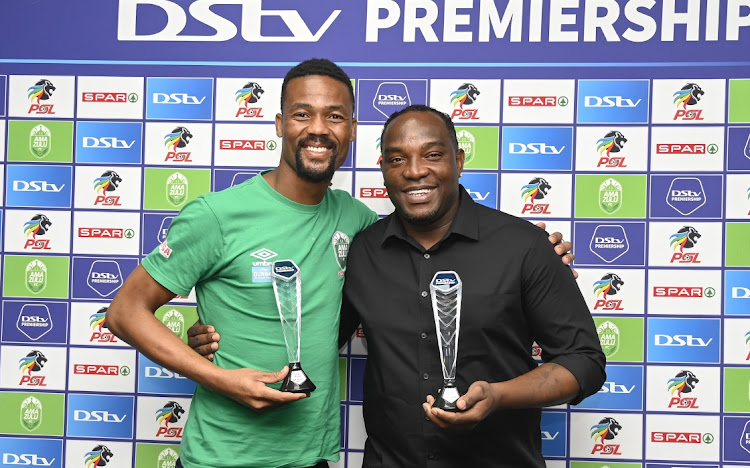 As much as he's of the view his shot-stopper Veli Mothwa is also worthy of the goalkeeper of the season accolade, AmaZulu coach Benni McCarthy has conceded that the odds favour Mamelodi Sundowns’ Denis Onyango.

Yesterday, McCarthy and Mothwa scooped the DStv Premiership March/April coach and player of the month gongs. In this period, Mothwa kept an impressive eight clean sheets, inspiring Usuthu to sevens wins and a draw. It’s Mothwa’s first player of the month recognition, while McCarthy also won the coach of the month award for January/February.

The former Chippa United keeper boasts 10 clean sheets from 23 DStv Premiership games, five behind Onyango who leads the charts, having played a game more than Mothwa.

“I think Onyango would be a wise choice, should Sundowns win the league. Mothwa is a top, top goalkeeper, but you have to look at the log and if you see who’s sitting at the top... it’s Sundowns and they’re at the top because they’ve got a formidable squad and a very good goalkeeper, Onyango,” McCarthy said yesterday.

“I’ve assessed the league and I have seen teams and goalkeepers. You can play for AmaZulu and can't have the performance that this guy (Mothwa) has had. Any other goalkeeper would have come to AmaZulu, I don’t think we would have had the season that we are having, so that tells a lot about the quality of Mothwa.”

The Usuthu trainer doesn’t expect his charge to feel hard done by should he end up not winning the award, insisting the 30-year-old is still a good player even without accolades.

“If he doesn’t win the award I don’t think he can be too disappointed because for me he’s been the best keeper this season and the most improved player. That alone for makes him a winner. He doesn’t need to win any award to earn my respect.”

Meanwhile, Kaizer Chiefs’ Samir Nurkovic walked away with the goal of the month gong for his overhead kick that gave Amakhosi a 1-0 win over rivals Orlando Pirates in March.

AmaZulu coach Benni McCarthy and the his goalkeeper Veli Mothwa were on Wednesday announced as March/April DStv Premiership’s coach and player of the ...
Sport
1 month ago

Baroka pulled off a much needed 1-0 win over fancied AmaZulu during their exciting DStv Premiership encounter that was played at the King Zwelithini ...
Sport
1 month ago

AmaZulu have exceeded expectations in their DStv Premiership campaign this season, but they are not showing any signs of slowing down.
Sport
1 month ago
Next Article