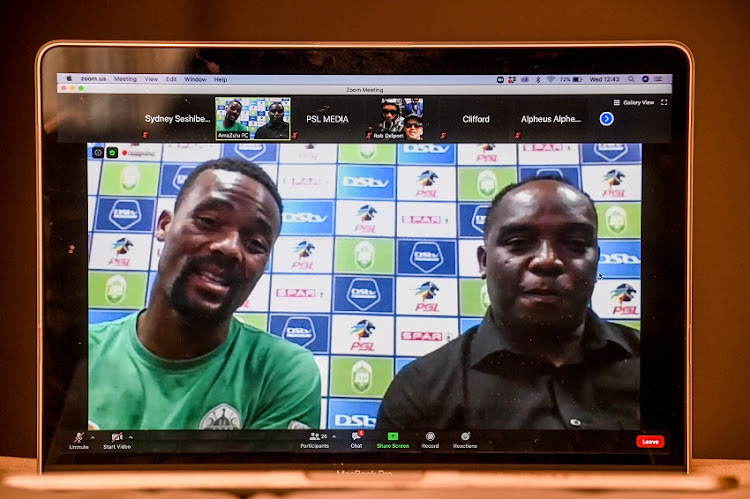 Veli Mothwa of Amazulu and his coach Benny McCarthy receive their respective awards during the DStv Premiership Monthly Awards for March and April 2021 virtual press conference on May 12, 2021 in Johannesburg, South Africa.
Image: Sydney Seshibedi/Gallo Images

AmaZulu coach Benni McCarthy and the his goalkeeper Veli Mothwa were on Wednesday announced as March/April DStv Premiership’s coach and player of the month winners.

The other winner was Kaizer Chiefs striker Samir Nurkovic who won the goal of the month award for the solitary goal he scored when his team downed their Soweto rivals Orlando Pirates 1-0 in March.

It is McCarthy’s successive coach of the month award after also winning it for the months of January/February.

It comes after Usuthu won seven and drawing one match against log leaders Mamelodi Sundowns‚ which was also the only tie they failed to find the back of the net.

In that unbeaten run of March/April‚ the second-placed Usuthu scored 13 goals and only let in two‚ which is also the main reason why former Chippa United goal stopper Mothwa‚ won the player of the month gong.

Nurkovic’s spectacular overhead kick against Pirates was voted as the best by the fans and is it a small consolation for the Serbian striker who has failed to repeat the form he had last season when Amakhosi came close to winning their first Premiership title in five years.

Speaking in Durban after receiving the award‚ McCarthy said he’s happy to be getting this accolade day after Usuthu’s remarkable 16-match unbeaten run was ended by Baroka FC who beat them 1-0 on Tuesday at the King Zwelithini Stadium.

“Veli has been remarkable since I’ve been here. This award could not have come at the better time for Veli to make him understand that sometimes all your hard work never goes unnoticed.

“This is the first of many for him to come and the player of the month could not have been selected by anyone for a better player.

“Not just this month for me‚ since I joined the club from December onwards‚ Veli has been the benchmark for what players need to be like to be professional.

“I’m very proud coach for Veli on getting this award and to Neil Boshoff for pushing him in training every day. As a coach you need that‚ sometimes I stop training to watch how these guys (goalkeepers) work.

“They’re all nuts by the way‚ but they work exceptionally hard and he deserves it. I’m pleased and happy for him and all his goalkeeper teammates that he has and his goalkeeper coach Moeneeb Josephs.” Mothwa said: “I would like to thank the coach for everything he just said and I also congratulate him for winning this award for the second time in a row.

“I think there’s still more awards for him to come because of the way we work and the way he tells us to work.

After the defeat on Tuesday‚ Usuthu will visit Orlando Pirates on May 26 and only a win for the Durban club will delay Sundowns from winning the league title.

But no matter what happens in the Pirates/AmaZulu game if Sundowns‚ who are seven points clear‚ win their next league match against neighbours SuperSport United a few minutes after Usuthu/Pirates match‚ the Brazilians will win a record fourth successive Premiership title.