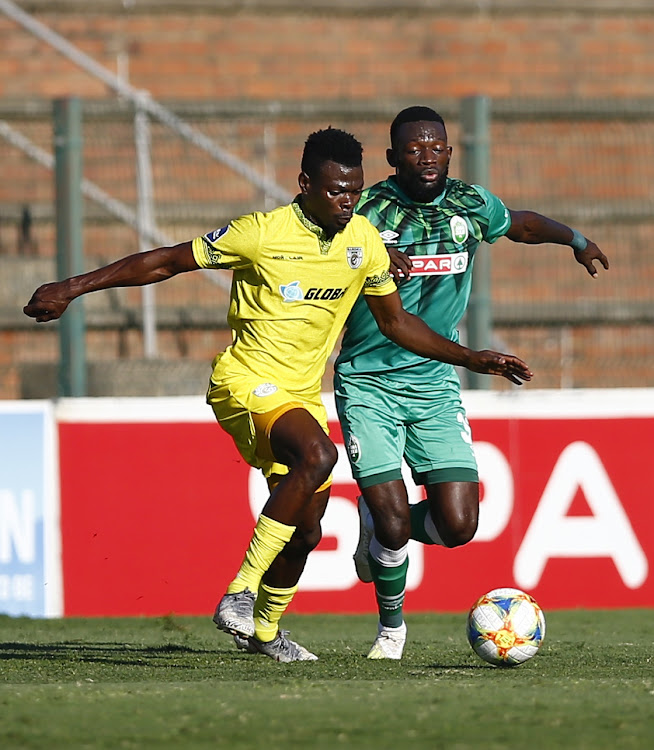 Richard Mbulu of Baroka and Augustine Mulenga of AmaZulu during the DStv Premiership 2020/21 game between AmaZulu and Baroka FC at King Zwelithini Stadium on 11 May 2021 .
Image: Steve Haag/BackpagePix

As wasteful as they were in the final third, Baroka still managed to all but end AmaZulu's faint title ambitions at King Zwelithini Stadium yesterday.

Richard Mbulu netted the solitary goal that earned Baroka the crucial win, putting them on the brink of the top-eight, while almost certainly handing the DStv Premiership title to Mamelodi Sundowns.

A discernably disappointed Usuthu coach Benni McCarthy felt playing at King Zwelithini Stadium instead of Kings Park Stadium, a home ground they'd been using  until yesterday, blunted them against Baroka. The AmaZulu coach also expressed his dissatisfaction at the manner in which the match officials handled the game.

Sowetan gathered that the game was moved to King Zwelithini Stadium to accommodate an event involving fellow KZN rugby union side The Sharks yesterday.

"I think psychologically, moving the game away from Kings Park affected the team because that used to be the club's home ground this season. We played every single game  at Kings Park and we became accustomed to the stadium, to the pitch and we became familiar with everything,'' said McCarthy, who also conceded the title was gone.

"We've got some brilliant results and now you get your home game moved to another stadium where you haven't played this season and that gives the opposition an opportunity to get it. The referee today, usually they're very sharp but I think today it wasn't their best game and unfortunately we were on the receiving end of  decisions not going our way.''

The defeat halted the Durbanites' purple patch of 16-game unbeaten streak in the league. Before yesterday, AmaZulu had last lost a league tie to Kaizer Chiefs in January.

It also means leaders Sundowns, who now have a game in hand, will clinch the championship if they win the next Dstv Premiership clash against SuperSport United as that would put them on 60 points, while at most AmaZulu can reach 59 in their last three games.

Usuthu, however, have already over-achieved this season and are favourites to secure second position, which should see them compete in the CAF Champions League next season.

AmaZulu have exceeded expectations in their DStv Premiership campaign this season, but they are not showing any signs of slowing down.
Sport
8 months ago

Rampant champions Mamelodi Sundowns are cruising to an unprecedented record-breaking fourth Premiership title on the trot but coach Manqoba Mngqithi ...
Sport
8 months ago

Benni McCarthy on Bafana: ‘All I can say to Broos is good luck and all the best’

AmaZulu chairman Sandile Zungu and coach Benni McCarthy have said they are relieved that the SA Football Association (Safa) ended the speculation ...
Sport
8 months ago
Next Article