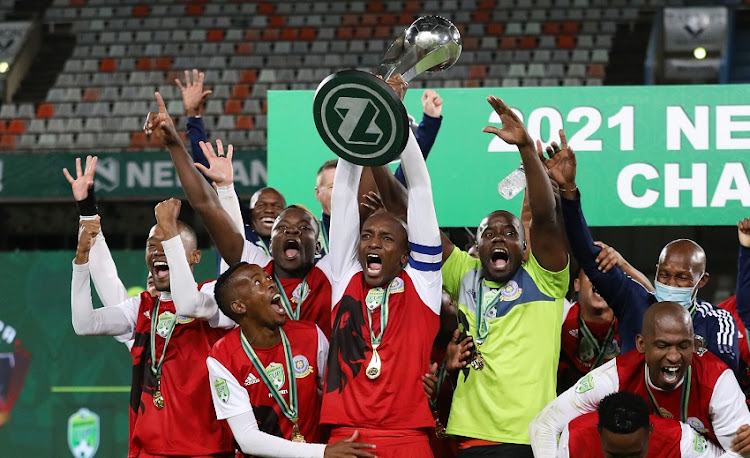 Washington Arubi: (4) Arubi had little to do in the first half as his defence did well to keep Chippa at bay. His commanding presence and experience gave his team a lot assurance.

Ndivhuwo Ravhuhali: (5) The left back had a lot do in cutting out Chippa’s attack and offered support to Thabo Rakhale, the winger playing in front of him.

Alfred Ndengane: (7) The former Orlando Pirates defender provided a good share of protection to his keeper and commanded his area well alongside his skipper and partner in the centre of the defence, Lehlohonolo Nonyane.

Diamond Thopola: (6) He not only helped his team in defence at right-back, but was able to move to attacking positions when his team had the ball. He used his experience well.

Lehlohonolo Nonyane: (6) Combined well with Alfred Ndengane in the centre of defence. He led the team well and showed leadership when they were attacked as Chippa tried to get into the game.

Thabo Rakhale: (5) He saw little of the ball and failed to provide his team the vital strength on the left. He spent a lot of time tucking inside but he did give Lerato Lamola a great chance to double his team's lead immediately after the restart.

Miquel Timm: (7) He was steady and gave his team a lot of stability in the midfield where he disturbed a number of attacks that Chippa were trying to build from the middle.

Thabo Mnyamane: (6) Mnyamane provided width on the right and gave his team options when they were on the front foot. Had a great shot at goal towards the end and was denied by Watenga with just a minute remaining.

Celimpilo Ngema: (8) He was influential, giving TTM a lot of positive passes going forward. He linked up well with goalscorer Ndlondlo, Thabo Mnyamane and Miquel Timm in TTM’s midfield.

Ndabayithethwa Ndlondlo: (9) One of the shortest and best players on the field. Scored a remarkable and history-making goal for TTM. He deserved his man-of-the-match award as his contribution was more than just the goal he scored. Ndlondlo gave TTM the lead when scored a spectacular goal in the 27 minute, taking a strike to beat Rashid Watenga as the ball deflected off his skipper Frederick Nsabiyumva. It was goal deserving a win for the R7-million prize money and a trophy, taking the PSL rookies to next year’s Caf Confederation Cup.

Lerato Lamola: (5) He started well but faded as the game progressed. Had to chase a lot as his team started to defend in numbers after taking the lead. He should have scored just after the restart when Rakhale provided him with a great assist but shot straight at the Chippa goalkeeper.

Rashid Watenga: (5) The Ugandan had no chance to save Ndlondlo’s strike as the ball took a slight deflection from his skipper Frederic Nsabiyumva’s head.

Frederic Nsabiyumva: (5) The Chippa skipper was unlucky with the deflection while trying to deal with Ndlondlo's long-range strike. Nsabiyumva kept the stability at the back despite his team’s setback.

Nyiko Mobbie: (6) The Chippa right-back was the usual self, trying to help his team when going forward. He, however, had to keep an eye on Rakhale.

Thabiso Lebitso: (6) He had a great chance to find an equaliser for his team in the first half but ballooned the ball over the bar.

Riaan Hanamub: (5) The left back had little to do in helping his team recover from Ndlondlo’s strike. He had to keep an eye on Mnyamane and couldn’t help his team much when they had to attack.

Thamsanqa Sangweni: (4) He was very ineffective and slow in providing his side vital passes. Was one the Chippa players guilty of giving Ndlondlo plenty of space to take strike for the winner from deep in the midfield.

Augustine Kwem: (4) The Nigerian striker was not seen as Mdlinzo and Lentjies were also starved of possession. That Chippa had no shot on target for the entire first half was down to Kwem not getting assists from his teammates.

Maloisane Mokhele: (4) Like Sangweni in the centre of midfield, Mokhele couldn’t help his team much in breaking TTM’s defence down on the left.

Kurt Lentjies: (5) Lentjies saw little of the ball but tried his best when he had half-chances. There wasn’t much support he received from the players who were supposed to supply him and Kwem with the ball.

Subs: Ayabulela Konqobe, Eva Nga, Gregory Damons, Anthony Laffor and Mduduzi Sibeko had little time to change the outcome of the game after coming on as second-half substitutes for the losing side.