SuperSport skipper could return to face TTM next week 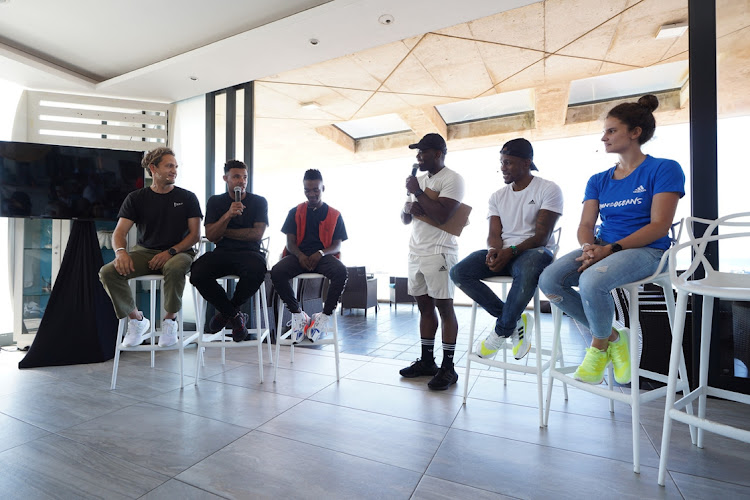 Bafana Bafana No1 Ronwen Williams, second from left, opines on the team’s coaching situation at this week’s media event. With him are athlete Frank Solomon, left, and sprinter Akani Simbine, and Laura Wolvaardt to the right.
Image: Supplied

Bafana Bafana No1 Ronwen Williams has welcomed the arrival of Hugo Broos as national coach, reasoning that the veteran’s experience will come in handy as the national side attempts to qualify for another major tournament.

Belgian Broos should land in SA sometime next week to take over Bafana's reins and, with World Cup 2022 qualifiers postponed until November, he should have sufficient time to run the rule over players he can use to rebuild the shattered national team.

No doubt he’ll look to the likes of Williams, the SuperSport United goalkeeper who was a key member of Molefi Ntseki’s side that just failed to qualify for next year’s Africa Cup of Nations in Cameroon.

“He [Broos] has a lot of experience and, obviously, that will help us a lot,” Williams said on the sidelines of an Adidas event in Durban this week. “He won the Nations Cup with Cameroon [in 2017], so clearly he’s familiar with the continent. We can’t have any complaints about him. We have a short time to adapt to his ways, and he will also have to adapt to us.”

Williams played in five of the six qualifiers as they missed out on a place at the continental finals after a calamitous defeat to Sudan in March. In particular, he bemoaned the fact Bafana could not secure two points from their last two games, which would have secured qualification.

“I felt we should have won against Ghana. We created so many opportunities and I don’t remember making a single save in that match. But going to Sudan, we clearly missed our senior players like [Bongani] Zungu, Keagan [Dolly], Dean Furman and Kamohelo Mokotjo.

"That’s over 100 caps worth of experience gone. We then started off badly, conceding in the first five minutes and couldn’t come back despite creating chances. The new coach should be able to help us rectify such mistakes and hopefully we can start the World Cup qualifiers on a high note.”

Williams has been injured but revealed that he started full training this week, which should put him in line for a return to action when SuperSport host Tshakhuma Tsha Madzivhandila on Wednesday. Matsatsantsa’s poor run of form – they have not won in the last 10 games – has coincided with Williams’s absence but he believes they are well on track to reach their goal of a top-five finish.

“It’s sad when you have to motivate the team from the sidelines instead of being there on the field, making last-minute saves. But we still managed to rack up some points despite not winning in the last 10 games. We had set ourselves a target of retaining the MTN8 and that didn’t happen, and also finishing in the top five. We knew it would be a difficult season because we lost our captain Dean, Aubrey Modiba and Clayton Daniels. We should do well in the remaining four games to meet our goal.”

Williams was speaking at the launch of Adidas' 'Impossible Is Nothing' series, aimed at encouraging youth to pursue their dreams

Belgian Hugo Broos has been named the new coach of Bafana Bafana‚ the SA Football Association (Safa) announced on Thursday.
Sport
7 months ago

New Bafana coach Broos makes his intentions clear: 'we have to rebuild the team – a younger team'

New Bafana Bafana coach Hugo Broos has made his intention clear that he intends to introduce younger blood to the national team to rebuilding a ...
Sport
7 months ago
Next Article