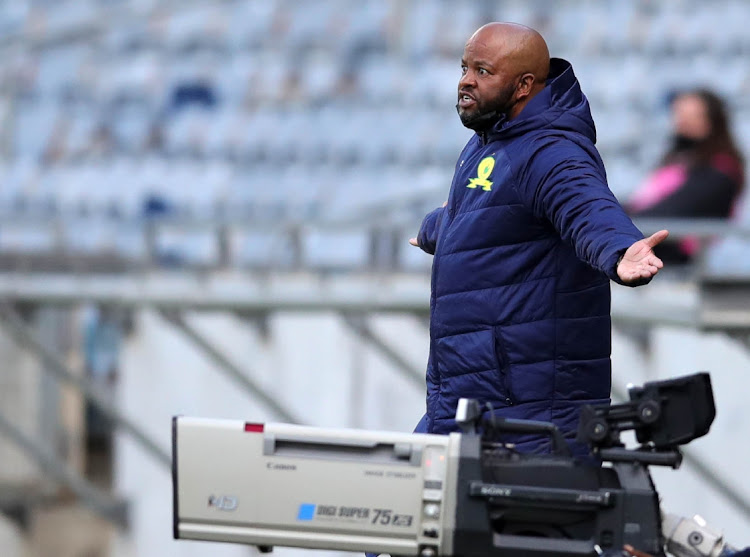 Mamelodi Sundowns have a chance to open up a seven-point gap at the top of the DStv Premiership table when they meet TS Galaxy at Mbombela Stadium on Sunday.

Sundowns lead second-placed AmaZulu by four points after their 2-0 victory over Maritzburg United at Loftus Versfeld Stadium on Wednesday.

They can increase that to seven with a victory on Sunday to put more pressure on their title rivals and take another step towards winning their fourth league title in succession.

It is an opportunity Sundowns co-coach Manqoba Mngqithi doesn’t want to miss and he said they would do their best to win their last game in hand to build a strong lead.

Mngqithi also revealed that attacking midfielder Gaston Sirino and striker Kermit Erasmus will be back to help them against Galaxy after missing the Maritzburg game due to injuries.

Themba Zwane has been ruled out due to a hamstring injury he picked up in the Maritzburg match. “Gaston had some slight groin [issues], while Kermit just had discomfort in his ankle but it is not something big. They are ready to help us in our match on Sunday,” Mngqithi told the media after the game.

“I think they will both be back, which might be a blessing in disguise after we might not have Zwane and Sphelele Mkhulise because of injuries and also his [Mkhulise's] suspension.

“Kermit wanted to play this match but we felt we needed him more going forward. We don’t want to risk it. It is important for us that we play players that are always fit enough to help the team.”

Meanwhile, Galaxy captain Given Msimango said they would have a plan to contain the deadly Sundowns  attack on Sunday.

Galaxy are coming into the match on the back of successive victories against Baroka and Cape Town City.

“It is going to be a very tough task for us playing Sundowns knowing the quality they have, but we will be prepared mentally and physically,” Msimango told the Galaxy media department.

“Yes, Sundowns have a dangerous attack. I feel we need to prepare very well for anything that will come. It is up to us to apply properly come the match day.

“Peter Shalulile is my former teammate along with the other few, and I don’t think that will play any role because the player he was then and the player he is now are two different things.

“As a team our duty is not to focus on one player and try to prepare for them as a collective, and go there and execute our plan.”

Mamelodi Sundowns increased their lead at the top of the DStv Premiership standings to four points with a 2-0 win over struggling Maritzburg United ...
Sport
1 month ago

Mamelodi Sundowns will not let their guard down when they face unpredictable Maritzburg United and tactically versatile Ernst Middendorp in a DStv ...
Sport
1 month ago
Next Article