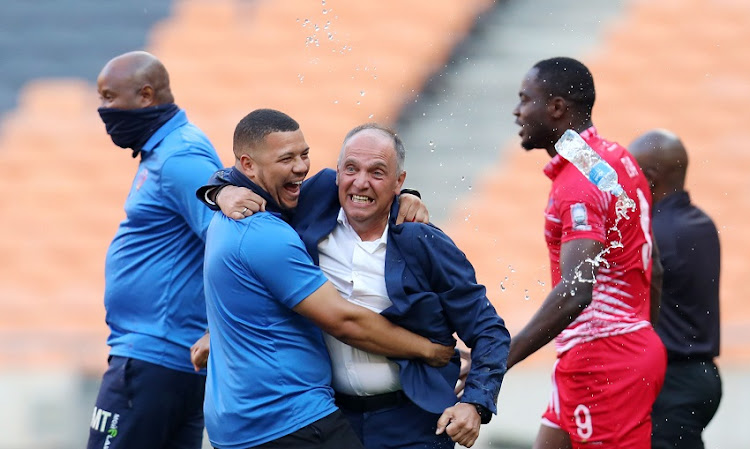 Both sides will be looking to win their first title in the elite league when they contest tomorrow's decider at Free State Stadium at 6pm.

“We expect a tough game, like every final. The cup final is a 50-50 game and it will be very tough. It might not be that attractive football because everyone wants to win,” Heric said.

“Lots of doors will be closed and [both sides will] not [take] too much risk, but I believe that people will enjoy the football and we must also take into consideration that both of us are fighting relegation.

“I don’t know how many weapons we are going to pull out for this game, but from my side we will do our best to win this game.”

The Serbian coach has been in charge of the team for two matches, winning both games without conceding a goal. He explained the changes he has made at the club.

“So far we managed to lift the self-confidence of the players and they put a lot of effort in our previous two games. I don’t know what happened before but I’m happy that the players are responding very well so far with the changes we have made,” he said.

“We are trying to keep the players focused on the things we are trying to achieve together, which is the cup final now, and after that... in our remaining league matches.

“We told the players what mental approach they must have, and we told them all the matches are cup finals now. The fighting spirit and right mentality will be vital for us.”

The 54-year-old believes the experience of Anthony Laffor and Oupa Manyisa, who have both won titles in the past, will help them tomorrow.

“We rely on these experienced players to guide the youngsters to success and better performances. That might play a big role for us, and we are privileged to have those guys here. They will help.

Vladislav Heric has revealed that he is on a “very short-term agreement” as coach of Chippa United, ahead of Saturday’s Nedbank Cup final against ...
Sport
1 year ago

With only a few games left to wrap up the current campaign, some coaches are already planning on how to bolster their sides next season.
Sport
1 year ago
Next Article