Chiefs ‘aware of’ and ‘will discuss’ Twitter posts trending on ‘#KaizerChiefsProtest’ 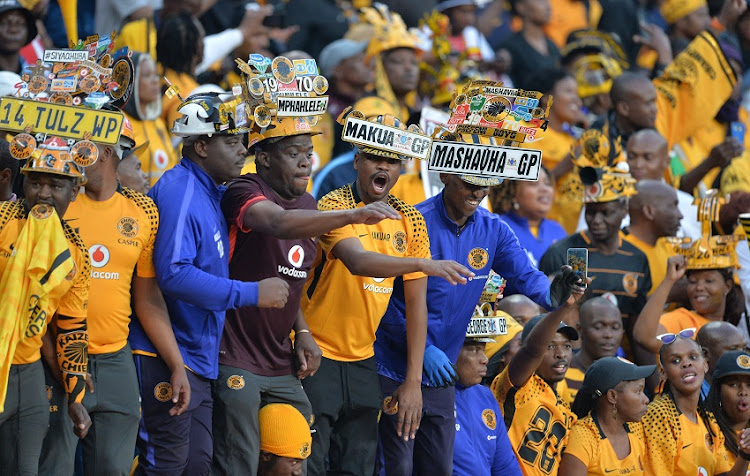 Fans during the Carling Black Label Champion Cup match between Orlando Pirates and Kaizer Chiefs at FNB Stadium on July 29, 2017 in Johannesburg, South Africa. At least two people have been reported to have been killed and several injured in a crush during the game at South Africa's biggest stadium.
Image: Lefty Shivambu/Gallo Images/Getty Images

Kaizer Chiefs are aware of a hashtag that was trending on Twitter on Friday that appeared to suggest fans might march on the team’s headquarters in Naturena this month in protest at Amakhosi’s poor performance.

The hashtag‚ “#KaizerChiefsProtest”‚ was trending on Twitter on Friday. Many of the posts were accompanied by an image of a well-designed poster‚ with the words “March to Naturena” and “Kaizer Chiefs fan protest”.

There were no further specifics on the poster‚ such as a date. Many of the posts were stating that the date of such a march would be Friday‚ May 14.

No clear organisers for a protest could be established‚ and it must be stressed that no official statement has been released on behalf of any organised body regarding any such potential action. There was no indication that the protest would indeed become any more than a social media hashtag.

Chiefs’ corporate communications manager Vina Maphosa did‚ however‚ acknowledge that the posts that were trending have been taken note of by Chiefs.

Maphosa was asked if the club has any reaction to the hashtag‚ and if Chiefs are taking the prospect of a potential protest by their fans seriously.

He said he could not give an official reaction yet‚ but said Chiefs are aware of the hashtag‚ and will discuss it.

“No reaction. We have a meeting about it next week‚ so I don’t have anything to share with you at the moment‚” Maphosa said.

He added: “We are saying we are aware of it.”

Maphosa said he could not shed light on why the date being spread for a protest on Twitter was May 14.

Many of the Twitter posts mentioned the name of Amakhosi’s football manager‚ Bobby Motaung‚ in particular.

Chiefs‚ the biggest-supported club in the country‚ are in the midst of their unprecedented sixth season without a trophy.

Bobby will tell them thats a family business...u can move to another team if u aint satisfied...😂😂😂#KaizerChiefsProtest pic.twitter.com/jGqzRU2fTo

They have battled under coach Gavin Hunt to ninth place in the DStv Premiership this season with four games remaining. The Soweto giants are in danger of matching or finishing worse than their two worst positions of ninth.

At the time of publishing there were just over 1‚900 tweets that included #KaizerChiefsProtest‚ and growing by about 100 more each 10 to 15 minutes.

What must happen, Bobby leave his father’s business because you’ll said so. I mean he decides everything there #KaizerChiefsProtest pic.twitter.com/pqXlymAVnS

When is the protest #KaizerChiefsProtest