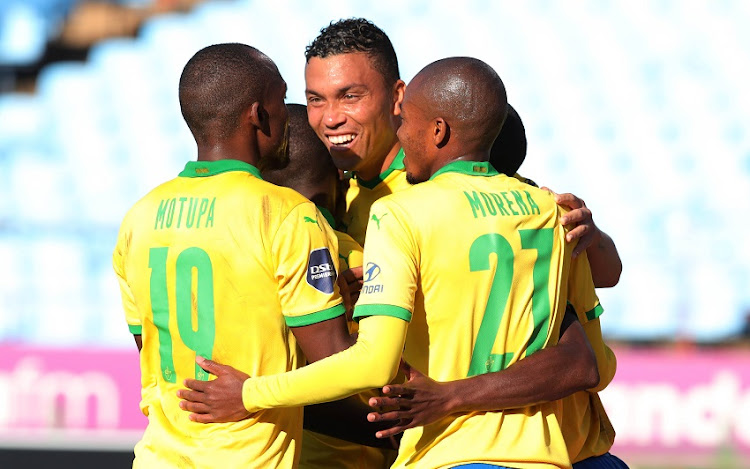 Ricardo Nascimento of Mamelodi Sundowns celebrates with teammates scoring a penalty during the DStv Premiership match between Mamelodi Sundowns and Maritzburg United at Loftus Versfeld Stadium on May 05, 2021 in Pretoria, South Africa.
Image: Samuel Shivambu/Gallo Images

Mamelodi Sundowns increased their lead at the top of the DStv Premiership standings to four points with a 2-0 win over struggling Maritzburg United at Loftus on Wednesday afternoon.

This was the second win in succession for the Brazilians following their 3-0 success over Orlando Pirates last weekend‚ and they have completely recovered from the mini slump that saw them go three outings without a victory.

Before they beat Pirates on Sunday‚ Sundowns played to goalless draws against fellow title chasers AmaZulu and Golden Arrows. They also suffered their first and only defeat of the season at the hands of Kaizer Chiefs.

With this victory secured through goals by Ricardo Nascimento and Gift Motupa‚ Sundowns have regained their advantage over AmaZulu who have played one more game as they enter the final stretch of the season.

For Maritzburg and their coach Ernst Middendorp‚ they still have a lot of work to do in their mission to get out of the relegation zone in their remaining five matches as they remain fourth from the bottom.

Sundowns return to action on Sunday when they visit improved TS Galaxy‚ while Maritzburg have time to sort out their deficiencies as their next outing is only on Wednesday against Arrows at home.

There was nothing much to write about during the opening exchanges and the notable moment came after eight minutes when influential Sundowns midfielder Themba Zwane was stretched off the field with what looked like a hamstring injury.

A few minutes after Zwane was replaced by Promise Mkhuma‚ Sundowns attacker Peter Shalulile was denied by the upright and the cross-bar in quick succession as Sundowns went all out for the opening goal.

In one of the most notable attacks of the opening half‚ Maritzburg striker Thabiso Kutumela delivered a telling cross into the box for Bongokuhle Hlongwane‚ but his header went wide after he out jumped Mosa Lebusa.

Sundowns took the lead after 38 minutes when Nascimento sent Maritzburg goalkeeper Marcel Engelhardt the wrong way from the penalty spot. This followed after Clayton Daniels was judged to have hacked Motupa in the box by referee Abongile Tom.

Despite being a goal down‚ Maritzburg continued to take the game to Sundowns and Hlongwane later benefitted from a misplaced pass by Aubrey Modiba‚ but his left-footed shot could not find the target.

Just after the hour mark‚ Maritzburg squandered a good opportunity to draw level when attacker Travis Graham unleashed a tame shot at Sundowns ‘keeper Denis Onyango after he was found unmarked by a cross from Kutumela.

Moments later the Sundowns technical team were forced into a change that saw defensive midfielder Mothobi Mvala coming on for Sphelele Mkhulise‚ who was stretched off the field with discomfort.

Sundowns secured the vital three points after 71 minutes when Motupa hammered a low shot past Engelhardt for his first goal for the Brazilians and the season after he received the ball from Mvala.