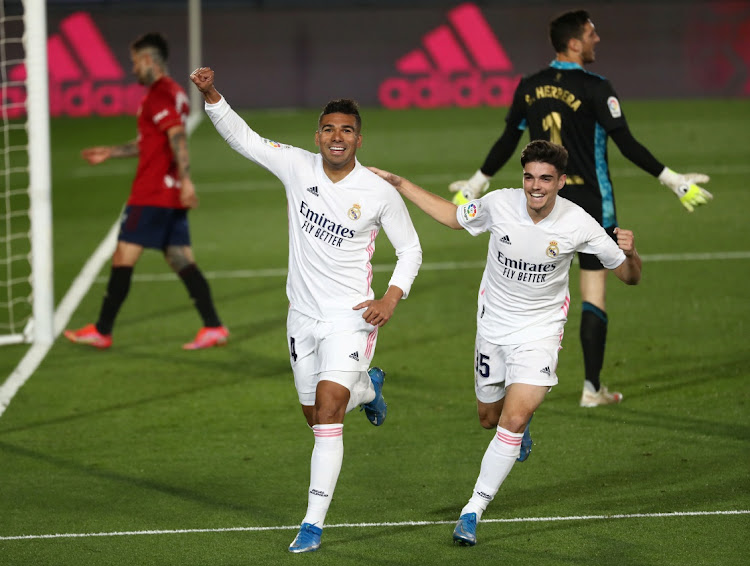 Madrid - Real Madrid's Brazilian duo Eder Militao and Casemiro struck in the second half to secure a 2-0 home win over stubborn Osasuna on Saturday and keep the heat on La Liga leaders Atletico Madrid.

Defender Militao finally prised open the visitors' defence by heading home from a corner in the 76th minute for his first league goal of the season.

Midfielder Casemiro made sure of the points four minutes later with a fortuitous strike when he attempted to control a through ball from Karim Benzema and sent it trickling into the bottom corner of the net, flummoxing keeper Sergio Herrera.

The win took second-placed Real to 74 points from 34 games after Atletico had moved onto 76 by riding their luck to win 1-0 at Elche earlier on Saturday.

"This was a very hard-fought victory. Our opponents defended very well and we had to keep trying until the end, we had to stay patient," said Real coach Zinedine Zidane.

"I'm so happy with the players. When your team plays well and has five chances like we had in the first half it's easy to get frustrated. But we showed patience and kept playing well."

Having stayed on Atletico's heels, Real will now turn their attention to reaching the Champions League final when they head to Chelsea in Wednesday's semi-final second leg after a 1-1 draw in the Spanish capital last week.

They may have to make do without the experience of centre back Raphael Varane, who came off at halftime with a suspected muscle injury.

Zidane left midfielders Toni Kroos and Luka Modric on the bench for the whole game and turned to reserve team player Antonio Blanco, while bringing on fellow youngsters Miguel Gutierrez and Sergio Arribas in the second half.

Eden Hazard was Real's most dangerous player in an impressive first half from the hosts, who had a slew of chances to go in front.

It took a set-piece for Real to finally take the lead, Militao meeting Isco's corner with venom to make it third time lucky and Casemiro's fortunate goal soon followed to see the home side over the line.

"We've had so many difficulties but today we've got three more points and we're going to keep fighting until the end," Zidane added.

"We know we can win (La Liga and the Champions League). I won't say that we will win them, but we're going to do everything we can to try."

Inter Milan clinched their first Serie A title in 11 years on Sunday after Sassuolo drew 1-1 with second-placed Atalanta to assure Antonio Conte’s ...
Sport
6 days ago

Chelsea's Havertz desperate for more starts after brace against Fulham