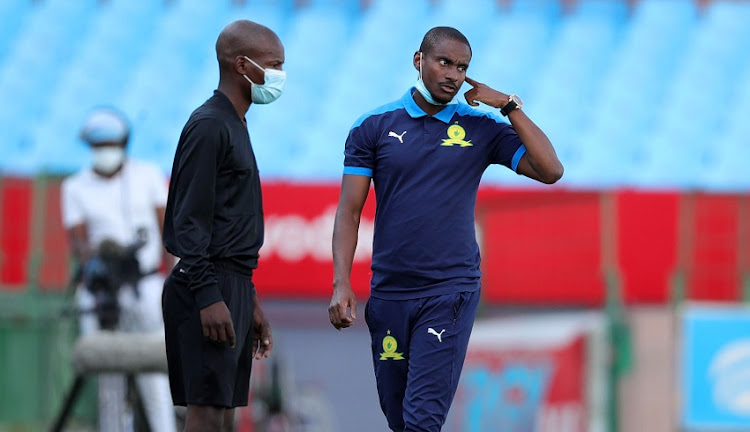 Mamelodi Sundowns are in a position of having banked points for most of the season‚ so if things get tough at the death end they will have an overdraft to dip into‚ co-coach Rulani Mokwena has said.

Sundowns’ two games in hand present a significant advantage. But‚ as they face another tough match-up against Orlando Pirates at Orlando Stadium on Sunday‚ Downs will also be aware they could be entering the slump that every title-challenging team experiences‚ the length of which determines if they hold out for the title.

Biggest challengers AmaZulu had their slump at the start of the season‚ before Benni McCarthy’s arrival as coach‚ and Bafana Bafana’s all-time to scorer has Durban’s sleeping giants flying.

That would appear to indicate that‚ with all the playing and technical power and facilities‚ Sundowns’ biggest challenge will be mental to prevent doubt creeping into the players’ minds‚ and reverse their mini-slump quickly.

“The reality is we are in control of the situation – we trust the players‚” Mokwena said in Thursday’s pre-match press conference to the big clash against fourth-placed Pirates.

“They may not always trust us but we have full confidence in our players‚ and we trust them. And the experience that they have in terms of winning and success‚ of course‚ is the culture‚ is part of Mamelodi Sundowns.

“Our focus is on trying to make sure we finish this block of games as best as we possibly can. We’ve got certain targets and it’s clear that with this block we may not reach the targeted points.

“But we have done a very good job‚ and we’ve banked a few points. And you bank these points at the beginning of the season so that when a slight mishap happens you are able to then go into your overdraft and still be OK.”

Apart from their squad advantage‚ three-time defending champions Sundowns also have all the experience closing out championships.

AmaZulu‚ as evidenced by the videos on social media of their recent change room post-match celebrations‚ have spirit‚ nothing to lose‚ and the enthusiasm derived from an exciting new club management and coach who is an inspirational figure.

It could be tighter than anyone could have imagined a few weeks ago.

Mokwena said Peter Shalulile completed a full training session on Wednesday‚ and might be available to meet Pirates. Gaston Sirino and Kennedy Mweene will also be assessed.