Arrows hold Sundowns to allow Usuthu to close in

Big AmaZulu win over City narrows gap to one point 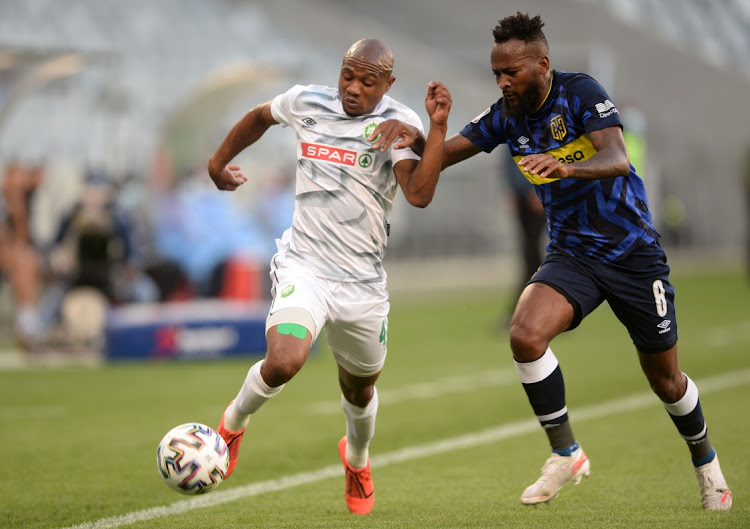 Thabo Qalinge of AmaZulu is challenged by Mpho Makola of Cape Town City during the DStv Premiership 2020/21 game between Cape Town City and AmaZulu at Cape Town Stadium on 28 April 2021.
Image: Backpagepix

AmaZulu are now on 47 points, one adrift of leaders Sundowns, who have two games in hand. The Brazilians' recent regression coupled with Usuthu's resurgence could be a recipe for an exhilarating title run-in.

The hosts made four alterations from the XI that suffered a shock 2-1 defeat, their first in the league this season, at the same venue against struggling Kaizer Chiefs last Sunday.

For Arrows, three players in Zolani Nkombelo, Nduduzo Sibiya and Matome Mathiane, who all started in the past game that ended goalless at Chippa United last Sunday, settled for spots on the bench as Devine Lunga, Pule Mmodi and Nkosinathi Sibisi started ahead of them yesterday.

The first half saw both teams go all out, attempting to score. As evenly-balanced as the first period was, Arrows created better scoring chances and at times forced Sundowns defenders to make mistakes at the back. Arrows' pressure put the likes of Mosa Lebusa and Rivaldo Coetzee under a lot of pressure. The duo nearly scored own goals in the first half.

Arrows defender Thabani Zuke and Sibisi gave Erasmus no breathing space whenever his teammates tried to tee him up. The midfield battle between Downs' Andile Jali and his Arrows counterpart Seth Parusnath was fascinating. Jali won more one-versus-one situations in the engine room, leaving the visitors' players with no choice but to foul him.

Victory was all the sweeter for McCarthy, who was sacked by the Cape side two years ago and has now resurrected his coaching career at AmaZulu, who are now firmly among the title contenders.

In another game, TS Galaxy beat Baroka 1-0 to move into the top eight.

Mamelodi Sundowns’ grip on top spot of the DStv Premiership has been loosened following their 0-0 draw with determined and enterprising Golden Arrows ...
Sport
7 months ago

AmaZulu boss Sandile Zungu has issued a strong statement to the South African Football Association (Safa) and said his mentor Benni McCarthy is not ...
Sport
7 months ago
Next Article