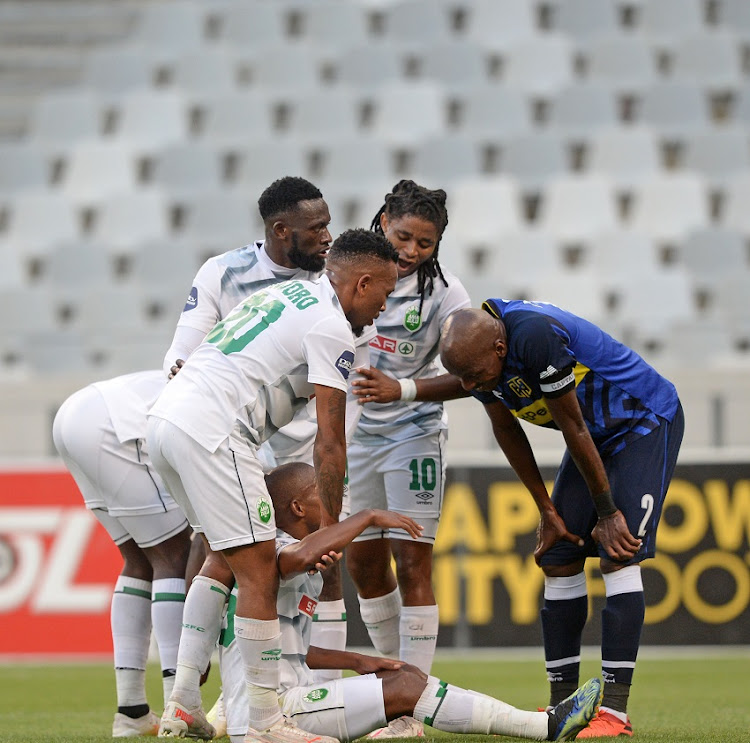 AmaZulu players gather around Luvuyo Memela of AmaZulu after he wins his team a penalty during the DStv Premiership match between Cape Town City FC and AmaZulu FC at Cape Town Stadium on April 29, 2021 in Cape Town, South Africa.
Image: Ryan Wilkisky/BackpagePix/Gallo Images

Mamelodi Sundowns’ grip on top spot of the DStv Premiership has been loosened following their 0-0 draw with determined and enterprising Golden Arrows at Loftus on Wednesday night.

As a result of this share of the spoils with Abafana Bes’thende‚ the Brazilians’ lead has been narrowed down to only one point by rampant AmaZulu‚ who crushed Cape Town City 5-1 in Cape Town.

With this turn of events‚ Sundowns (48 points from 23 games) still enjoy the advantage as they have two games in hand over second-placed AmaZulu and third-placed Arrows‚ who have accumulated 47 and 43 points respectively from their 25 matches.

Wednesday evening’s result means Sundowns have dropped an important five points at home from their last two matches as they also lost to their bitter rivals Kaizer Chiefs on Sunday‚ who handed them their first defeat of the season.

It doesn’t get any easier for the Brazilians as they must now turn their attention to their next league match against Orlando Pirates at Orlando Stadium on Sunday where they will be under pressure to return to winning ways.

Arrows and their coach Mandla Ncikazi also have a difficult match against the high-flying AmaZulu on Saturday in what is definitely the most anticipated KwaZulu-Natal derby in recent history.

The match got off to a flying start with spotlight mostly on experienced referee Victor Gomes with tackles flying all over the pitch as players tried to take control of the proceedings.

Sundowns were the first to settle in this highly exciting match with their most threatening attacks on Arrows coming from the efforts of attackers Sphelele Mkhulise‚ Kermit Erasmus and Themba Zwane.

After a sluggish start‚ Arrows found their footing as the game progressed and they started to take control with the likes of Knox Mutizwa‚ Pule Mmodi and Divine Lunga key for them.

The opening exchanges were exciting but most of the action was saturated in the midfield where Andile Jali and Rivaldo Coetzee went toe to toe with Seth Parusnath and Gladwin Shitolo.

Goalkeepers Denis Onyango of Sundowns and Sifiso Mlungwana of the visitors were largely reduced to spectators for most of the first half as they were not tested regularly with the game mostly played in the midfield.

The second half went with the same pattern where most of the action was in the middle of the park but at least there was an increased number of chances to make Onyango and Mlungwana earn their salaries.

After a number of attacking chances from both sides in the closing stages‚ they had to settle for a share of the spoils as there were no goals to be celebrated and the focus now for Sundowns and Arrows is on Pirates and AmaZulu respectively.