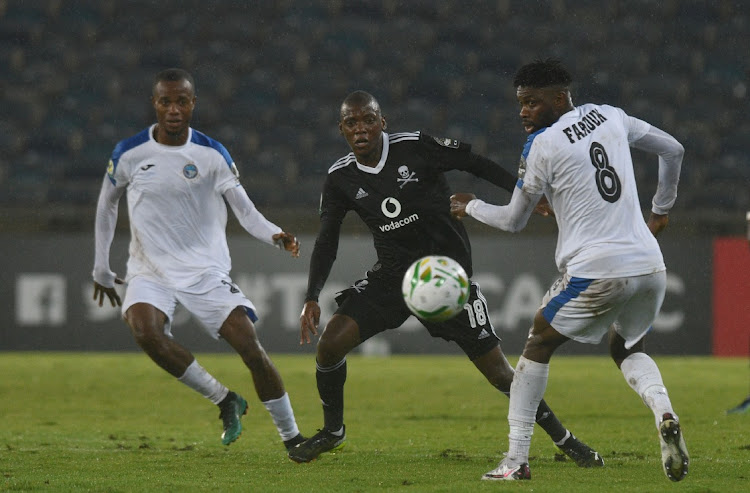 Kabelo Dlamini of Orlando Pirates challenged by Farouk Mohammed of Enyimba during the 2021 CAF Confederation Cup match between Orlando Pirates and Enyimba on the 17 March 2021 at Orlando Stadium.
Image: Sydney Mahlangu/BackpagePix

Orlando Pirates need a point to confirm their place in the CAF Confederation Cup knockout stage when they visit Enyimba in their last Group A match at Enyimba Stadium tonight (11pm).

The Buccaneers head into the game in Nigeria on top of Group A with nine points from five matches while Enyimba are in third place with six points.

A draw will raise Bucs points to10, which will be enough for them to advance to the quarterfinals of the competition.

All the teams in the group still have a chance to reach the quarterfinals, as second placed Al-Ahly Benghazi with seven points can also finish with 10 points if they beat ES Setif in the other match at the same time tonight.

Even Setif at the bottom of the table with five points, can finish second and qualify if they beat Al-Ahly and Pirates beat or draw against Enyimba. Pirates defeated Enyimba 2-1 in Johannesburg on March 17.

Pirates, whose goalscoring form had been the most disappointing part of their positive and attack-minded approach, could have wrapped up qualification with a win against Setif in their last Confed Cup fixture a week ago. But the Bucs fired blanks and played to a disappointing goalless draw at Orlando Stadium.

Despite drawing their last two CAF matches, Bucs coach Josef Zinnbauer remains optimistic that they will get the job done in Nigeria.

“If we play the same way we did against Swallows, I don’t foresee any problem against Enyimba,” Zinnbauer said, referring to yet another drawn match – 1-1 against Swallows in the DStv Premiership on Saturday.

“We need to show the same attitude, hunger and fighting spirit to do well,” he said about the Swallows game in which Pirates had 14 shots at goal with seven on target, compared to Swallows' just two.

It is a tough week for Bucs. Next after CAF trip to Nigeria, they welcome Mamelodi Sundowns in the DStv Premiership at Orlando Stadium on Sunday.

The Sea Robbers are still smarting from their 4-1 defeat by Sundowns in the Nedbank Cup quarterfinals in Pretoria on April 15.

Orlando Pirates seemed wary of taking a the more adventurous approach needed to earn three points against ES Setif at Orlando Stadium on Wednesday, ...
Sport
3 weeks ago
Next Article