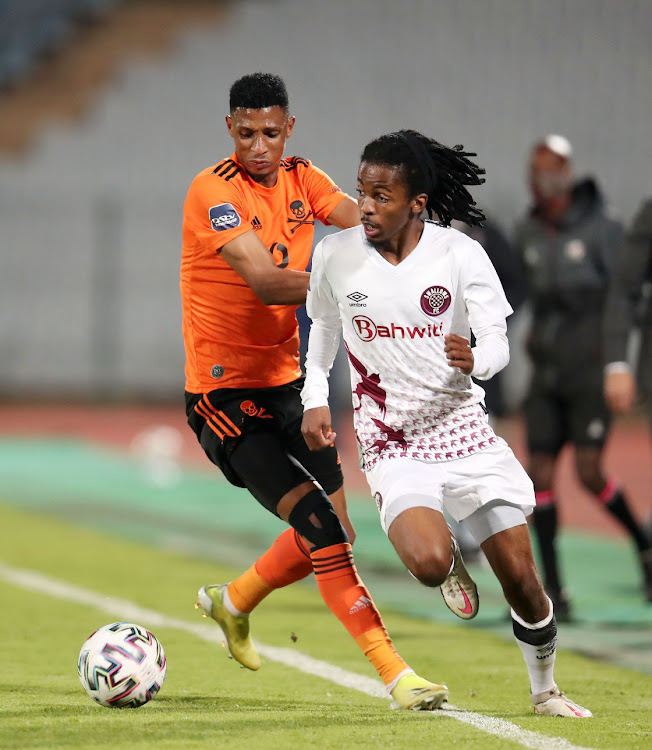 Kamohelo Mahlatsi of Swallows FC challenged by Vincent Pule of Orlando Pirates during the DStv Premiership 2020/21 match between Swallows and Orlando Pirates at Dobsonville Stadium in Soweto on the 24 April 2021.
Image: Backpagepix

Orlando Pirates coach Josef Zinnbauer admitted that Bucs have a mountain to climb in their pursuit for a top-two finish which will see them qualify for the CAF Champions League.

This after they dropped points in their 1-1 draw against Swallows in the DStv Premiership match at Dobsonville Stadium on Saturday.

“It was a good game for us. I think we deserved three points. But we won’t speak about it, the title or the Champions League spot. It’s still a long way, but we still need points for these targets,” Zinnbauer told the media after the game.

“It is a long way. But we will fight for it. Next we have an important game against Enyimba [in the CAF Confederation Cup on Wednesday].”

“But the performance gives us hope going forward. We can play on Wednesday without fear (against Enyimba).”

Meanwhile, Swallows coach Brandon Truter said the draw felt like a defeat. Swallows scored first through Thulani Hlatshwayo’s own goal in the first half, before substitute Tshegofatso Mabasa equalised late in the second half.

“It feels like a loss. To be honest, I think we executed the ball better, and without a ball, we still played better, but [we had] a lapse of concentration, and they scored from there.

“But other than that, I think we played well. I don’t think they dominated us. That’s why I said this draw feels like a loss to us, but we will take a point at home.”

After halting Mamelodi Sundowns’ dream of ending the DStv Premiership campaign without a loss by beating them 2-1 at Loftus Versfeld Stadium ...
Sport
2 weeks ago