Sundowns smiling as Swallows and Pirates cancel each other out 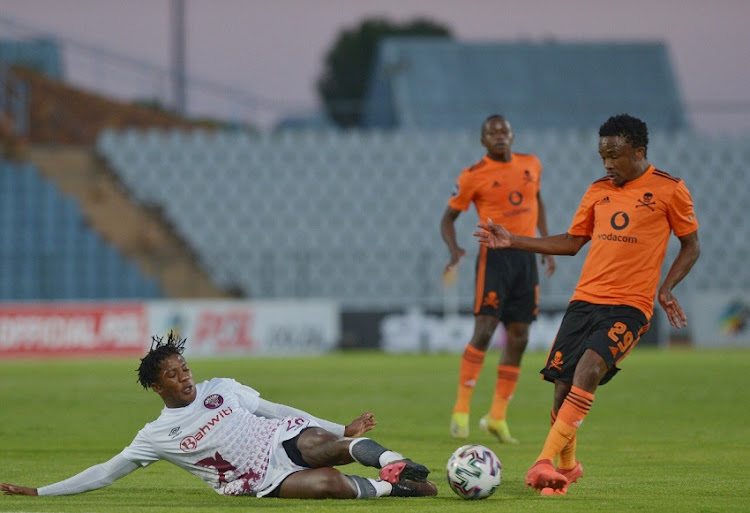 It was that sort of afternoon at Dobsonville Stadium where neither Swallows FC nor Orlando Pirates teams did enough to win their 1-1 DStv Premiership encounter.

After they took an early lead first half lead through an own goal by Pirates’ stand-in captain Thulani Hlatshwayo in the 15th minute‚ Swallows did not capitalise on their momentum to get the insurance goal.

Pirates‚ who levelled matters through a header by substitute attacker Tshegofatso Mabasa 15 minutes from time‚ ended the match on the front foot but they could not find the winning goal.

Both coaches of the original Soweto derby will rue the two points they dropped here at Dobsonville Stadium in Soweto as they have lost considerable ground on runaway leaders Mamelodi Sundowns.

Pirates will put this share of the spoils behind them and turn their attention to the Caf Confederation Cup where they visit Enyimba of Nigeria on Wednesday looking to finally confirm a place in the knockout stages.

The Buccaneers will only return to league action next month against Mamelodi Sundowns at Orlando Stadium while the next match for Swallows is on Tuesday against SuperSport United at home.

Few scoring chances were created in the opening stages with most of the battles in the midfield where Pirates’ Ben Motshwari‚ Fortune Makaringe and Vincent Pule went toe-to-toe with Lehogang Mokoena‚ Musa Nyatama and Kamohelo Mahlatsi.

The most notable attack went the way of Pirates in the 13th minute but defender Ntsikelelo Nyauza failed to give his close-range header direction after a loose ball fell fortuitously on his path in the box.

Swallows got it right later after Bafana Bafana captain Hlatshwayo shot himself in the foot by beating his own goalkeeper Wayne Sandilands as he tried to clear a cross from Vuyo Mere.

In the build-up for the opening goal‚ Mere found himself in plenty of space on the right wing from where he delivered a cross aimed at Ruzaigh Gamildien who was beaten by Hlatshwayo.

Before the break‚ Pirates’ attackers went in search of the equaliser but Linda Mntambo and Hlatshwayo were denied by the watertight Swallows defence.

Swallows defender Wandisile Letlabika gave the ball away to Pirates attacker Deon Hotto but the Namibian’s final effort was cleared off the line by Njabulo Ngcobo shortly before the half-hour mark.

Pirates continued to probe and were finally rewarded with the deserved equaliser that came in the form of a powerful header by Mabasa‚ when he connected with a cross from Wayde Jooste in the 75th minute.