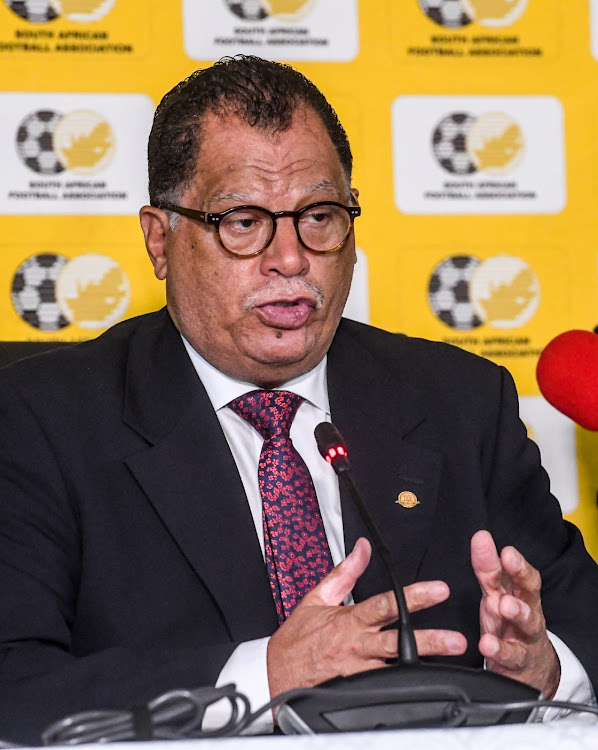 SA Football Association (Safa) president Danny Jordaan has suggested his previous chief executive officers are at fault for lack of implementation on promised development programmes such as the nine provincial satellites for the association’s School of Excellence.

In an interview with TimesLIVE‚ Jordaan said he believed Safa have finally found a CEO in incumbent Tebogo Motlanthe capable of implementing plans successfully.

After the firing of Molefi Ntseki as Bafana Bafana coach on March 31‚ which followed the national team’s failure to qualify for the 2021 Africa Cup of Nations‚ Safa are set to announce a new coach at Safa House after a national executive committee (NEC) meeting on Saturday. Carlos Queiroz‚ Herve Renard and Hugo Broos are reportedly the remaining candidates on the Safa technical committee’s shortlist.

The association has also come under criticism for the 2021 failure‚ with the media and public questioning why Safa’s strategy remains to continually change Bafana coaches‚ but not address the core issues stifling football development.

Among these are the decline in schools’ football. Safa in 2015 took control of schools soccer from the SA Schools Football Association (Sasfa)‚ pointing at under-performance where at most 5‚000 out of 27‚000 schools played the sport. This led to a protracted court saga that was settled in favour of Safa at arbitration in 2019‚ but which hamstrung efforts to improve schools’ football.

When he was elected to his first term in 2013‚ Jordaan undertook to restore the nine provincial satellites to the School of Excellence in Johannesburg. One has been created‚ at Hoy Park in Durban.

“It exists in Durban for KZN‚ it exists in here Gauteng‚ The national infrastructure exists [at Safa’s National Technical Centre‚ or NTC‚ in southern Johannesburg] and the other provinces will come on soon‚” Jordaan said.

He said plans exist for the NTC at the Fun Valley leisure resort – which has been upgraded with three excellent fields since it was acquired by Safa in 2014‚ but apparently still lacks the medical‚ audio-visual and instructional facilities envisage at its outset to make it a world-class training venue – to incorporate a national academy.

The failure to reach Cameroon 2021 – postponed to January and February next year by Covid-19 – has endangered the aims of Safa’s much-vaunted Vision 2022‚ targets of which included Bafana being ranked in the top three in Africa and top 20 in the world‚ and qualifying for the 2022 World Cup in Qatar. Bafana are currently ranked 75th in the world and 15th in Africa.

“Under his watch we have made tremendous progress. And he has the energy.

“But you then have to get back. And that’s why I’m saying we have‚ eventually‚ a CEO who understands the urgency of this issue.”

Dennis Mumble and Gay Mokoena‚ who both served as CEOs under Jordaan‚ the latter in an acting capacity‚ both last year sent reports to Safa’s NEC that were leaked to the media that made startling accusations of abuse of office and lack of implementation of plans against the Safa president.

Bafana‚ hit by withdrawals of European-based players to their squad after a Fifa directive related to Covid-19 instructed that clubs did not have to release players‚ lost 2-0 to Sudan in Omdurman on March 28‚ where a draw would have seen them reach the Nations Cup.

SA are up against it to qualify for the 2022 World Cup‚ where the qualifiers start in June. They are drawn in Group G with Ghana‚ Zimbabwe and Ethiopia‚ all of whom qualified for Cameroon 2021. Bafana lost 2-0 away and drew 0-0 against a severely depleted Ghana in the Nations Cup qualifiers.