Goalie shines in open play then outdoes himself in sudden death 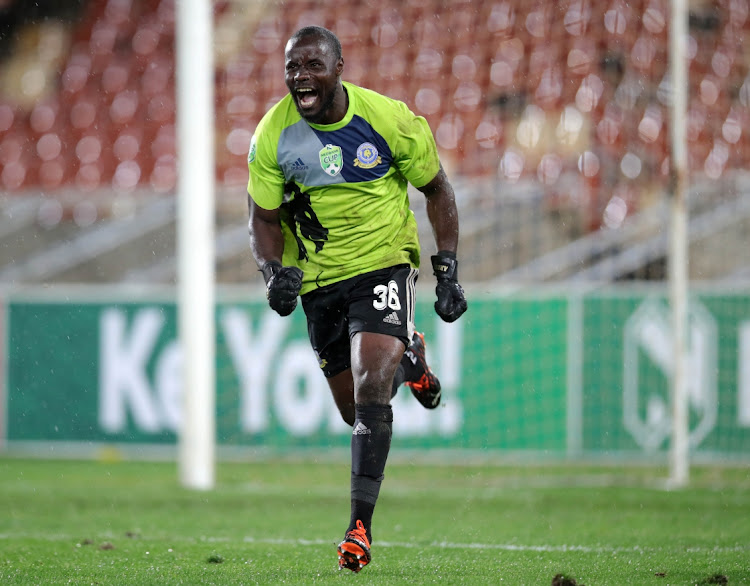 On the back of an all-around superb display throughout the match at Loftus Versfeld Stadium yesterday, Tshakhuma Tsha Madzivhandila goalkeeper Washington Arubi also saved Mamelodi Sundowns club skipper Hlompho Kekana’s spot kick to propel the Limpopo side to the Nedbank Cup final.

Tshakhuma will now face fellow relegation candidate Chippa United in the final on May 8. Downs’ elimination didn’t only mean they can’t defend their Ke Yona crown but it also ended their ambitions of winning the treble this season.

Following his brilliant display off the bench in their 4-1 humiliation of Orlando Pirates in the tournament’s quarterfinals, where he netted his maiden goal in the club’s shirt last Thursday, Lesedi Kapinga was rewarded with a spot in the starting XI. Second-choice goalkeeper Ricardo Goss also earned a rare start, with usual suspect Dennis Onyango presumably rested.

There were no big changes in TTM’s line-up. Former Bafana Bafana leading marksman Tokelo Rantie spearheaded the Limpopo side’s attack in what was his second start in five outings across all competitions since joining the team in February.

The first stanza was far from being an entertaining affair as chances were hardly created from either end. Sundowns still enjoyed more ball possession but TTM made sure that they made little inroads into their box.

Themba Zwane and Kapinga tried to take matters into their own hands, playing quick one-twos and using their individual brilliance to unlock the stubborn Tshakhuma rearguard led by skipper Lehlohonolo Nonyane. However, this never yielded any fruit as they ended up losing the ball before making the final decision.

Nonyane and Alfred Ndengane also made sure Downs’ in-form attacker Peter Shalulile had little time on the ball. The TTM central defensive pair did a brilliant job to keep Shalulile at bay for the entire first half. Sundowns started the second half brightly, creating a number of chances in quick succession but Arubi produced a number of saves to deny the hosts goals.

The Chloorkop side nearly broke the deadlock in the very first minute of the stanza when Sphelele Mkhulise looped the ball over Arubi before Ndengane made a last-ditch clearance, thwarting the ball from crossing the line.

The hosts persisted, putting more pressure on TTM’s defence. Zwane missed a sitter in the 55th minute, ballooning what was supposed to be an easy tap-in from close range. Sundowns continued with their patient build-ups even in extra time but Arubi stood firm to keep the scoreline goalless, forcing the game into penalties.

Tshakhuma Tsha Madzivhandila (TTM) caused one of the biggest upsets in recent history by dumping defending champions Mamelodi Sundowns out of the ...
Sport
1 year ago

Highly unpredictable TTM come up against the rampaging Sundowns, who humiliated rivals Orlando Pirates 4-1 in the quarterfinal on Thursday, with a ...
Sport
1 year ago
Next Article