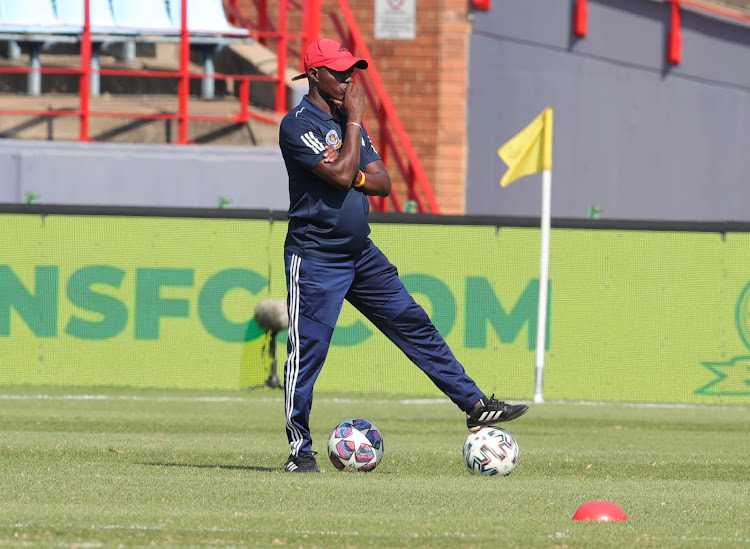 Mpho Maleka was in charge of the Tshakhuma Tsha Madzivhandila bench when they dislodged Mamelodi Sundowns to advance to the Nedbank Cup final.
Image: Samuel Shivambu/BackpagePix

Tshakhuma Tsha Madzivhandila (TTM) coach Mpho Maleka has given insight into the detailed plan he used to bundle defending champions Mamelodi Sundowns out of the Nedbank Cup on Sunday.

The Brazilians were overwhelming favourites to book their place in the final against Chippa United‚ but TTM turned the tables by taking the match all the way to a penalty shoot-out where they prevailed 6-5 in the semifinals.

“When we planned how to play against Sundowns‚ we decided that the best solution was to learn from the league match that we lost to them and play without fear‚ press them high and stick to our 3-5-2 formation‚” said Maleka‚ who featured for AmaZulu‚ Free State Stars‚ Black Aces‚ Moroka Swallows and Baroka during his playing career.

“Sundowns play a 3-4-3 formation‚ which is very flexible‚ and it can easily change to 5-3-2 or 4-2-3-1. They know how to move the ball around and they have been doing this for the past five to six years if I am not mistaken.

"We also planned to lock their wingers or wingbacks and central midfielders to stop them from playing because we believed that’s where the battle was going to be won or lost.

“We also knew that they are good runners off the ball and we kept on reminding the players to keep that in mind.

"Our game plan was all about denying them space to run because they can play between the lines‚ and we are happy that our players executed the game plan while enjoying themselves on the pitch and playing without fear.

“The injection for this game was that we played and won against SuperSport United‚ Swallows and our journey was against tough opponents.

"This gave us belief that we can do this against a quality team like Sundowns.”

Maleka hopes that this victory will serve as a springboard to re-launch their season as they are in the relegation zone in the DStv Premiership where they are sitting third from the bottom.

“We hope and pray that this win will transfer to the DStv Premiership because that’s where it matters most.

"We worked on the spine of the team‚ which starts with goalkeeper Washington Arubi‚ central defender Alfred Ndengane‚ Edgar Manaka in the central midfield and Tokelo Rantie up front.”