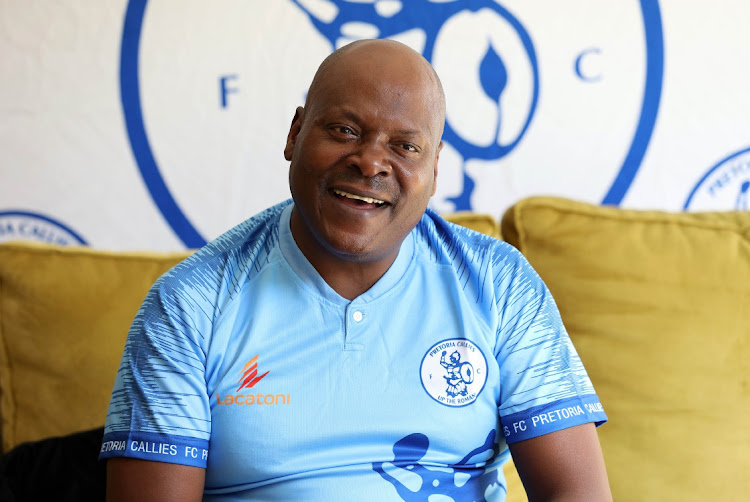 You cannot speak about Pretoria Callies and not mention Lucas “Masterpieces” Moripe.

That was the opening line from club president Moses Malada during an exclusive interview with Sowetan at Lebamboo Guest House, home to the GladAfrica Championship club.

The Romans, as Callies are nicknamed, are the only club from the second tier left in the Nedbank Cup. They will take on Chippa United in tomorrow's semifinal.

“We never really planned anything for Nedbank Cup but God has been great... we are in the semifinals. I feel like it is no longer about us but about us representing the whole GladAfrica Championship. If God gives us the cup, then thank you,” Malada said.

“We’ve got a good team, disciplined and committed, which is key before one looks at talent,” he said.

Malada speaks about the revival of Pretoria Callies with a broad smile.

Callies were in the lower ABC Motsepe League for the past two seasons and got promoted to the National First Division, also known as the GladAfrica Championship, last season.

“A number of the legends who played for Callies are part of the [club] structure,” said Malada, who emphasised that they had retained the colours of the old Callies and made sure that their home ground is Atteridgeville's Super Stadium, now renamed Lucas Masterpieces Moripe Stadium in honour of the man revered as the greatest ball player SA has known. Moripe was also nicknamed “Modimo wa Bolo" (The God of Football) by admirers.

“That is why I told you that you just cannot speak about Callies and not mention him [Moripe]. The club has benefited a lot from his popularity and it is befitting that he continues playing a role in the revival of Callies," said Malada .

“There is no specific role that these legends play but their input is welcomed and taken seriously. They used to attend all our games until the Covid-19 pandemic impacted us.”

Malada revealed that plans were afoot to erect a statue of Moripe next to his house.

“It is important to honour our people while they are still alive,” said the club owner who organised a special 71st birthday for the legend last year.

Club media liaison officer Doctor Maphalle said they are involved in community projects to re-establish Callies's grounding in the township.

“We donated soccer kit to Hans Kekana Seconday School,” he said. “One things that touched the hearts of club legends was when management gave them jerseys that bore the jersey numbers they wore during their playing days. You could see how emotional they were; I mean those jerseys have now been nicely framed for them. We encouraged people out there to start supporters’ branches countrywide to match the stature of Moripe.”

History beckons for Pretoria Callies and Chippa United, as they are just a match away from reaching their first cup final.
Sport
1 year ago

New Chippa United coach Siyabulela Gwambi has urged his side to build on their performance during their 1-2 defeat to Mamelodi Sundowns in the DStv ...
Sport
1 year ago
Next Article