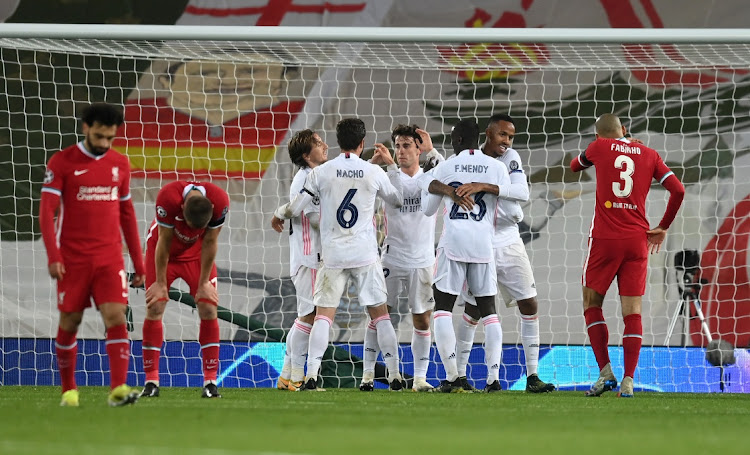 WE MADE IT: Real Madrid players celebrate reaching the Uefa Champions League semi-finals after drawing 0-0 with Liverpool at Anfield on April 14 2021 in Liverpool
Image: Michael Regan/Getty Images

Liverpool failed to overturn their first-leg collapse against Real Madrid, with a 0-0 draw at Anfield on Wednesday ensuring their exit from the Champions League and manager Jurgen Klopp had no doubt where the blame lay.

The deficit from the 3-1 defeat in Madrid could have been wiped out in the opening 20 minutes with the chances Klopp's side created.

Their first-leg performance gave them too much to do at Anfield and their poor finishing wrecked any chance of a turnaround.

“You always need the key moments. We didn't lose the tie tonight, we lost in Madrid. It was uncomfortable for Madrid. We were good, aggressive, had chances,” he said.

“We didn't score and then the experience of Real Madrid played the tie (out)," he said.

Mohamed Salah missed early chances and the attacking trident he forms with Roberto Firmino and Sadio Mane looked nothing like the deadly forward line of the past two seasons.

“We know how often Mo Salah finishes these things with closed eyes,” said Klopp, “Not here. Tonight it was absolutely OK, but we are out.”

Midfielder James Milner felt the team had approached the game in the right spirit but agreed their finishing had let them down.

“The performance, intensity and desire was good. But you can't not take the chances we had and that was the difference,” he said.

“We were obviously the better team. We did enough to win the game.

“We wanted to come out of the blocks and set that tempo. If we had played that first leg with the same intensity it would have been very different. Ultimately we weren't good enough over two games,” he said.

It has been a season of underachievement for Liverpool, sixth in the Premier League, and it could get worse if they fail to qualify for next season's Champions League, an outcome which would have financial repercussions.

“We love this competition and for other reasons it is very important we are back in it. We can now concentrate on the Premier League and we will,” Klopp said.

Brazilian Militao was making his ninth start this season while Spaniard Nacho had played little more than half his side's matches, but their assured displays meant Real barely missed first-choices Sergio Ramos and Raphael Varane.

“We had some huge absences, Ramos and Varane are two pillars of this team, but Nacho and Militao proved they have what it takes,” Real midfielder Casemiro said.

“You never know when you might get your turn, and it's not easy at all to play in this team, but they showed they are up to the task.”

Barcelona coach Ronald Koeman raged against the referee for not awarding them a penalty in their 1-2 defeat to Real Madrid in Saturday's 'Clasico', ...
Sport
1 year ago
Next Article