'Hopefully, we will get a few friendlies against stronger teams' 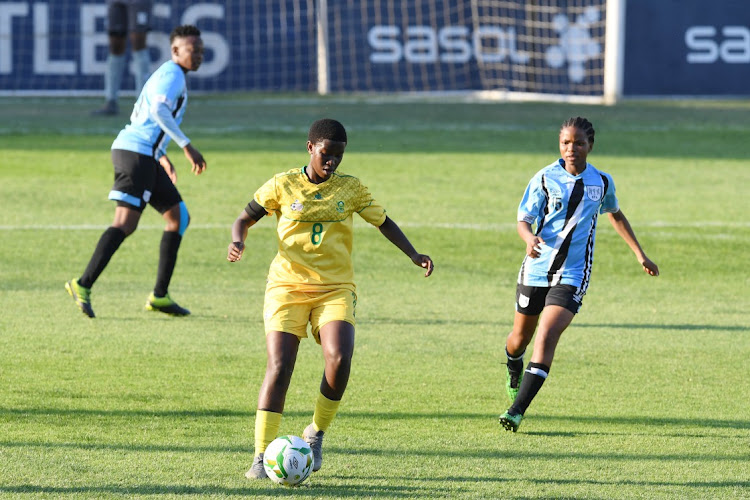 Sibulele Holweni of South Africa and Segakolodi Didukanyane of Botswana during the Womens International Friendly match between South Africa and Botswana at Bidvest Stadium on April 13, 2021 in Johannesburg.
Image: Lefty Shivambu/Gallo Images

Banyana Banyana coach Desiree Ellis desires to get stronger opponents in the next Fifa week after cruising in recent friendlies against Zambia and Botswana.

Kgatlana also netted against Botswana, with the other goal coming from Gabriela Salgado, who’s on the books of local side JVW. Kgatlana, Matlou and Amanda Mthandi (CD Badajoz, Spain) were the only overseas-based players in the team.

After their failure to qualify for the upcoming Olympics in Tokyo, Japan, SA utilised these friendlies as part of their preparations for the Cosafa Championships and 2022 Africa Women’s Cup of Nations qualifiers.

“Two games, two wins and a clean sheet in the second one, that’s good. We will continue to try and improve going forward. We have a Fifa date in June and there’s also a Fifa date in September, October and November,’’ said Ellis.

“We are not sure when are the Afcon qualifiers starting. Somewhere in between that there’s a Cosafa Cup. We have to be ready. We must make sure we play stronger opponents now. Hopefully, we will get a few friendlies against stronger teams.’’

As much as she hinted the games against Zambia and Botswana weren’t as competitive, the Banyana trainer took solace from the fact that they gave her a chance to have a look at players like Tiisetso Makhubela and Noxolo Cesane, who’ve been in and out of the set-up.

“We wanted to make sure we give everyone a chance to play, especially Tiisetso, who’d not played for a while. She had a good 90 minutes under her belt [against Botswana], she went with us to the World Cup but wasn’t available in the Cosafa Cup,’’ Ellis explained.

“Noxolo wasn’t available for the Cosafa Cup either, we wanted to make sure she also gets some minutes. We tried different combinations. We want to make sure we have all our basis covered, but it becomes very difficult if a team doesn’t really come to play [referring to Botswana’s defensive approach] but the honours was on us to open them up.’’

After they failed to qualify for the Olympic Games in Tokyo in July, Banyana Banyana want to redeem themselves by qualifying for the Africa Women's ...
Sport
1 year ago