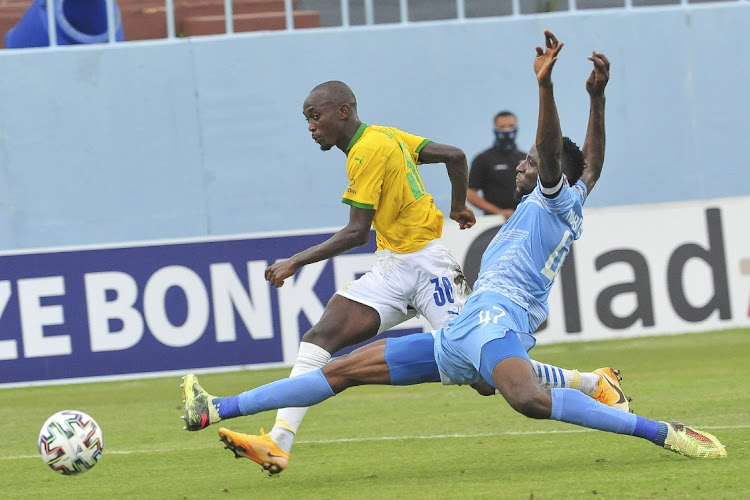 Peter Shalulile is making a habit of scoring winning goals for Mamelodi Sundowns this season.

Again yesterday, Shalulile scored the winner as Sundowns defeated Chippa United 2-1 in the DStv Premiership match at Sisa Dukashe Stadium to extend their lead at the top to six points.

The Namibia international inspired Sundowns to late victories against Black Leopards and Stellenbosch in recent matches that seemed destined for a draw.

He has now netted nine goals in the league to help Sundowns maintain their lead.

AmaZulu had reduced the gap to just three points after their 1-0 victory over Stellenbosch on Friday, but Sundowns have restored their six-point lead with 10 games remaining.

The result left Chippa in trouble in the relegation zone. They remain second from bottom with 17 points from 22 matches and have now gone nine games without a win.

Sundowns extended their unbeaten run in the league  to 20 matches and will shift focus to the mouth-watering Nedbank Cup quarterfinal match against Orlando Pirates at Loftus Versfeld on Thursday .

Downs started the brighter of the two and took control of the match, with the Chilli Boys showing a lack of ambition.

Sundowns were able to find gaps behind Chippa's defence. They were patient as they passed the ball around with confidence.

Their patience finally paid off with the match 16 minutes old when Themba Zwane netted from a spot-kick to make it 1-0.

Despite being a goal down, Chippa continued to sit back and offered little going forward in the first half.

Shalulile nearly doubled the lead after he was set through on goal, but Chippa goalkeeper Ismail Watenga came out to deny him and the sides went to the interval with the score 1-0.

Chippa came back a better side and found the equaliser immediately after the restart, and against the run of play, through Augustine Kwem, who beat Denis Onyango  to make it 1-1.

But after finding the equaliser, Chippa slipped back into defensive mode. They seemed to play more with the fear of losing than with the desire to win.

That allowed Sundowns to control the game again and the champions restored their lead 15 minutes from time, with Shalulile heading home the winner from a rebound.

Premiership leaders Mamelodi Sundowns returned to winning ways after they beat troubled Eastern Cape side Chippa United in a league match on Monday ...
Sport
9 months ago

Mamelodi Sundowns are not reading too much into what is happening at Chippa United ahead of their DStv Premiership meeting at Sisa Dukashe Stadium ...
Sport
9 months ago
Next Article