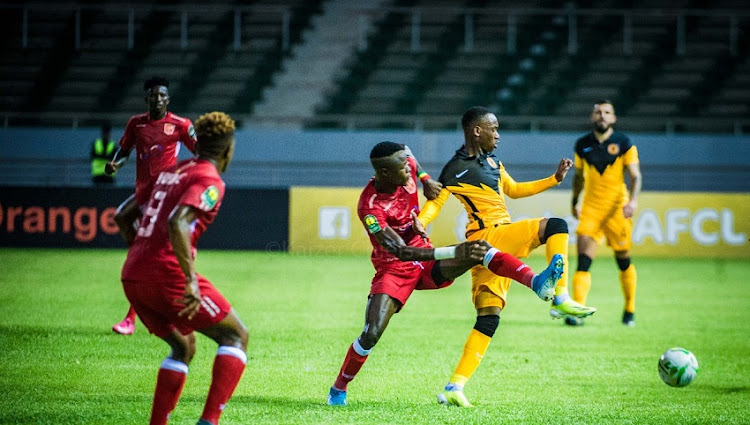 Kaizer Chiefs have qualified for the CAF Champions League quarter-finals after securing a 2-2 draw away to Horoya on Saturday night.
Image: twitter/kaizer chiefs

Kaizer Chiefs’ tenacity kept them in contention throughout their Group C campaign for the Caf Champions quarterfinals‚ and it was a remarkable fighting performance in Conakry on Saturday night that saw them reach that stage with a dramatic 2-2 draw against Horoya.

In fact Gavin Hunt’s men clawed their way through a tough 90 minutes with such menacing tenacity that Amakhosi‚ having just completed their first-ever group stage‚ now might even fancy their chances of an upset in the quarters too.

Chiefs and Horoya ended on nine apiece. On the head-to-head ruling‚ with Horoya having drawn 0-0 in Johannesburg‚ Chiefs progressed through benefit of more away goals scored in the games between the two.

Horoya’s big men troubled Chiefs for the opening hour‚ including when Yakhouba Gnanga Barry headed the Guinean combination ahead two minutes into first-half injury time at Stade General Lansana Conte. From there it was all action‚ Daniel Cardoso pulling one back from the penalty spot in the 67th‚ winger Oula Abass Traore re-establishing the lead in the 69th‚ and Khama Billiat scoring the decisive equaliser in the 76th.

Missing both big strikers Samir Nurkovic and Leonardo Castro‚ Chiefs coach Gavin Hunt had Billiat back in his starting line-up up-front‚ behind Lebohang Manyama as the No.9 in a somewhat makeshift strike combination.

Horoya took until the end of the opening half to get their scoring breakthrough but it came through sustained pressure that grew through the 45 minutes.

Beanpole striker Barry would always be a handful. So was Ghanaian playmaker Baffour Kyei with his set piece deliveries.

Chiefs had just about appeared capable of absorbing the pressure‚ but Horoya also looked confident that a breakthrough would come. It did‚ in first half injury time‚ another set piece from Kyei‚ from a corner‚ powerfully headed past Itumeleng Khune by Barry.

Early in the second half Horoya missed a sitter as technical right winger Traore skipped through the centre and placed opposite wing Mandela Ocansey in space on the left‚ the Horoya skipper blasting over.

With the comfort of a goal’s lead‚ the Guinean side moved the ball with even greater assurance as‚ given a scoring draw would put Chiefs through‚ they sought a second that would make the game safe.

In such situations‚ in continental competition‚ rather than any form of attractive‚ or even structured or organised‚ football‚ it takes pure fight to claw back into a game.

After Lazarous Kambole replaced Happy Mashiane from the break‚ Dumisani Zuma came on for Manyama in the 65th. Moments later the substitute’s attempted cross was handled by defender Khalid Diaw. Cardoso struck the penalty into the top-middle‚ as keeper Robert Odongkara dived right.

Chiefs’ levelling of matters – bringing the scoring draw into play – lasted all of two minutes. Another delivery from that man Kyei‚ from a corner on the left‚ was headed past Khune by Traore.

Again‚ Amakhosi were up for the fight. They had drawn level once‚ so knew they could again. Their second came from a neat‚ classically South African quick-passing build-up‚ Frosler outside feeding Nkonsingiphile Ngcobo in the left channel‚ who put Zuma into space down the flank to square‚ Billiat knocking the finish past Odongkara.

If Chiefs have been victims of gamesmanship throughout the group stages‚ they felt no compulsion to do any differently 14 minutes from a famous result‚ as players took their time recovering from “injuries”.

Khune’s desperate save at the end from a lobbed attempt at goal kept his team in the quarters.