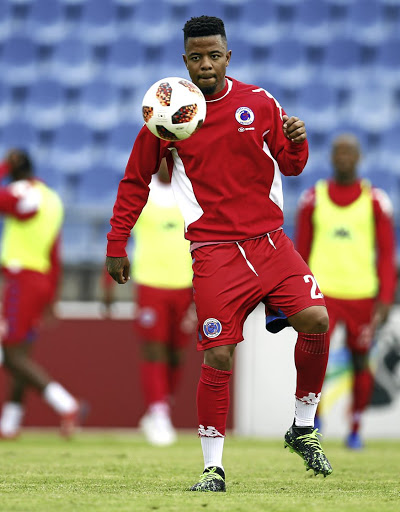 Even the three league medals George Lebese boasts of are not as big an achievement as it would be to aid his new club Tshakhuma Tsha Madzivhandila avoid relegation and win the Nedbank Cup.

On Monday, Lebese linked up with Tshakhuma as a free agent, having terminated his contract with American second-tier club Switchbacks last month. He  could not travel back to US to rejoin the Colorado Springs-based outfit owing to stringent Covid-19 regulations. Lebese penned a short-term deal until the end of the campaign with TTM.

“My biggest priority right now, with this great opportunity to play in the Premiership again, is to contribute to the club’s dream of retaining their status and win the Nedbank Cup ’’ Lebese told Sowetan yesterday.

TTM face either Mamelodi Sundowns or Orlando Pirates in the semifinals on April 18.

“I have won a number of titles [three league titles, plus one Telkom Knockout and an MTN8 title] in my career, especially at Chiefs; but surviving relegation with TTM would be the best moment in my career because it’s a big challenge to fight for survival,’’ Lebese added.

The Mamelodi-born, Tshwane, star had joined Switchbacks in December 2019 after struggling to find a team locally post leaving Sundowns three months earlier. At Downs his career had declined tremendously, amassing just six starts in 16 games across all competitions in two years. During his two-year spell at Chloorkop, Lebese also spent six months on loan at SuperSport United.

The 32-year-old winger admitted he was disheartened to see his stint in the US coming to an abrupt end. The ex-Chiefs and Downs man also weighed in on the difference between the Premier Soccer League and the United States Soccer League (USL) Championship, where he racked up 16 appearances and two goals.

“I enjoyed my time in the US and I was disappointed that Covid-19 cut my time short there. The league there is more or less the same as the PSL...  it’s just that the environments are not the same.’

The USL ranks below the Major League Soccer, the top league in the US.

Luyolo Nomandela wants to repay the faith shown by Chippa United by helping the club escape relegation this season.
Sport
1 year ago

US-based midfielder George Lebese came out to defend former Kaizer Chiefs team-mate George Maluleka on Wednesday after it was revealed that the ...
Sport
2 years ago
Next Article