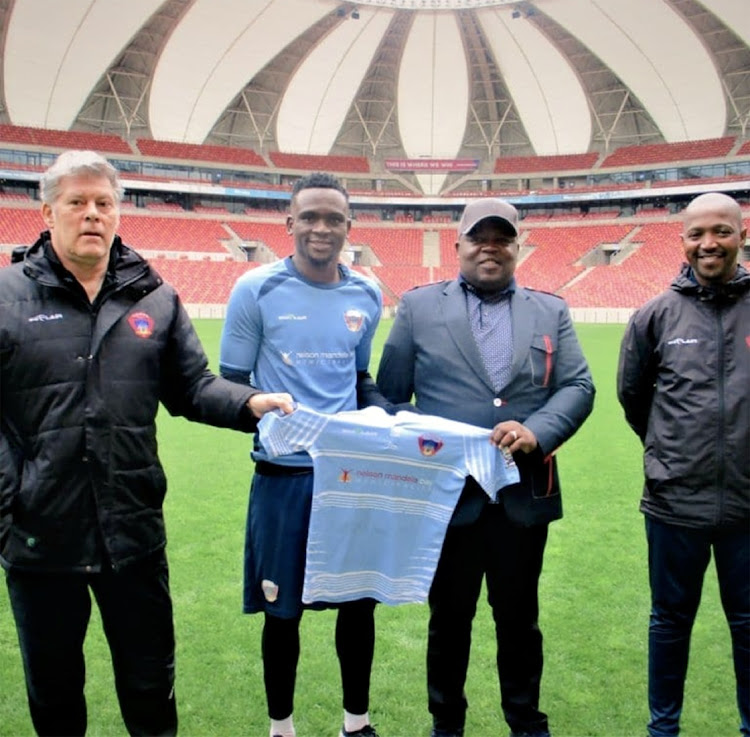 Luyolo Nomandela, who has signed a two year contract with the Club.
Image: INSTAGRAM

Luyolo Nomandela wants to repay the faith shown by Chippa United by helping the club escape relegation this season.

The 31-year-old joined the Chilli Boys on a two-year deal from MCM Stars, the Buffalo City team campaigning in the ABC Motsepe League.

Nomandela played premier league football in the past, for Free State Stars and later Mamelodi Sundowns and Cape Town City. His best performances however were during Stars days, which earned him two Bafana Bafana caps including a goal on debut against Burkina Faso in 2013.

But his career had been on a down spiral after leaving Stars for Sundowns, ending up spending short stints at several clubs including at the Citizens after whom he descended into lower leagues for sides such as Mthatha Bucks, Tornado FC and Baberwa FC.

On his return to the Premiership from the third-tier, Mandela hooks up with other long-time campaigners Oupa Manyisa and Thamanqa Sangweni, who recently joined the Chilli Boys on free transfers.

“I want to say I’m excited and proud to be here. I want to thank the chairman of the team [Siviwe Mpengesi] for believing in me and also the management,” Nomandela told the club media department yesterday.

“I have been getting a lot of support from everyone in the team, and I know I’m coming into a team that is not doing well in the league and I’m fully aware of that.

Controversial Belgian coach Luc Eymael is set to be shown the door by Chippa United later on Wednesday.
Sport
1 year ago

“But I’m not going to put myself under pressure because I got into a team which got good coaches, good management and good players.

“I’m just excited to join a home team from Eastern Cape and I want to thank the chairman for believing in me. He told me that this is my chance, and I want to pay him by delivering for the club," said the star born in Ngqeleni near Mthatha.

“I have to help the team going forward, possibly survive relegation.”

Nomandela could make his debut when Chippa welcome his former team Sundowns in the DStv Premiership match at Sisa Dukashe Stadium on Monday.

“We got a fixture on Monday against Sundowns who are doing well, but we are desperate for three points and win every game that comes our way,” he said.

“The preparations have been going alright as we have a new coach, and the spirit in the camp is marvelous. Everyone is excited, feeling fresh, and the energy is up there.”

Chippa axed their previous coach Dan Malesela at the weekend.

Lebese joins on a short deal until the end of the season from American side Switchbacks where he was forced to terminate his contract due to Covid-19 travel restrictions.