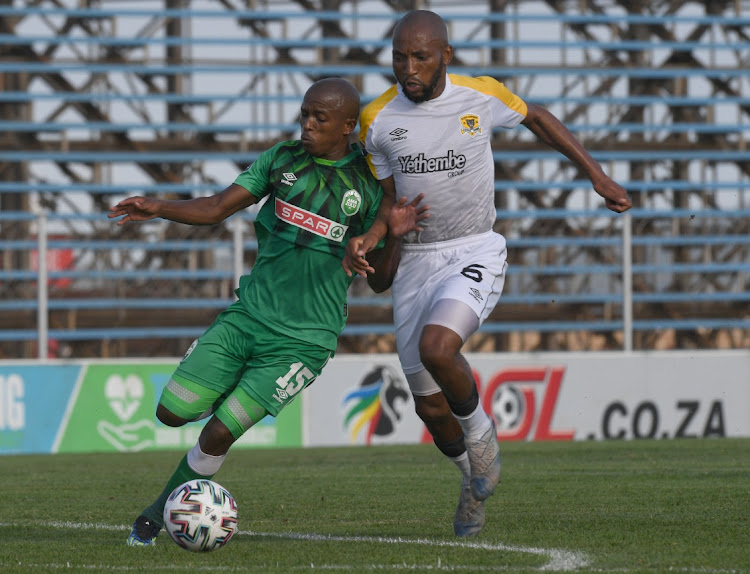 Sibongiseni Mthethwa of Black Leopards challenges of Luvuyo Memela of AmaZulu during the DStv Premiership 2020/21match between Black Leopards and AmaZulu on the 04 April 2021 at Thohoyandou Stadium, Thohoyandou.
Image: Sydney Mahlangu/BackpagePix

AmaZulu chair Sandile Zungu's drive to finish in the top four in the DStv Premiership is gathering momentum.

At the start of the 2020/21 season, the ambitious Zungu set a high standard for a team that was battling relegation in last season. However, Usuthu seem to be on track, judging by their recent run of results in the league.

Coach Benni McCarthy's charges have won their past five matches and moved up to third in the log table. The KwaZulu-Natal outfit are level on 37 points with second placed Golden Arrows after 21 matches and trail log leaders Mamelodi Sundowns by three points, though the leaders have played three games less.

At the weekend, Usuthu dug deep to record a 1-0 victory over bottom side Black Leopards at Thohoyandou Stadium in Venda, Siyethemba Sithebe's 57th-minute strike enough to clinch all three points.

Swallows chairperson David Mogashoa is tired of drawing matches in the DStv Premiership and has demanded a win in their next game against Golden ...
Sport
9 months ago

The former Cape Town City mentor praised the players for his team’s meteoric rise yet he still prefers to take things one step at a time and to see where they will finish at the end of the season.

“It is about putting the opposition under pressure and we did that well. Another great performance from Veli and his defence of four clean sheets in a row. As a coach, you can only praise the players for their valiant performance on a difficult pitch in Venda,” said a jubilant McCarthy.

Usuthu are on the road again and will visit Stellenbosch at the Dani Craven Stadium in the Western Cape on Friday at 5pm. Being the serial winner that he is, McCarthy is targeting the maximum points against the unpredictable Stellies.

He is eyeing a sixth straight win in the Premiership and the Usuthu players will go to the wine lands high on confidence.

“We have a difficult game coming up and it is getting tougher in each game, but we are heading in the right direction. If we keep on working hard and putting on our best performance, we will get there,” said McCarthy.