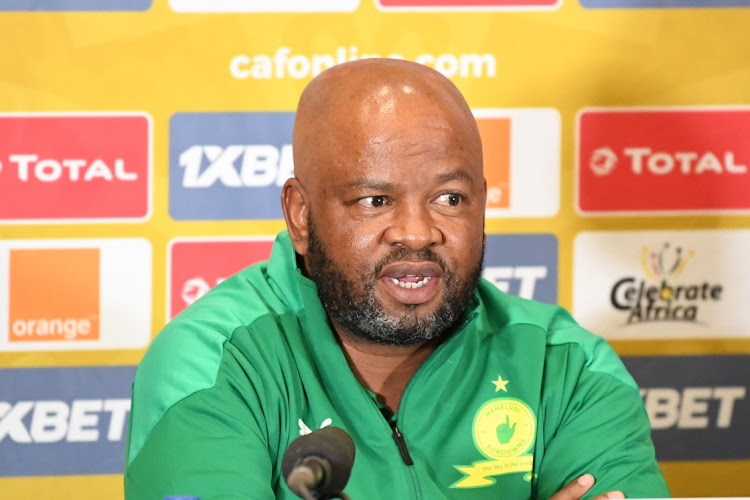 Mamelodi Sundowns may have already qualified for the CAF Champions League quarter-finals with two games to spare, but co-coach Manqoba Mngqithi wants to finish with a bang.

The unstoppable Sundowns are guaranteed to finish first in Group B, even if they can lose their remaining two games, but Mngqithi wants to win them to finish with 18 points.

Sundowns maintained their 100% record in the group phase when they completed a double over TP Mazembe in Pretoria on Tuesday to move to 12 points, following other victories over Al-Hilal and CR Belouizdad.

“Personally as a coach, I’m driven more by winning matches,” Mngqithi told the media after the match at Loftus Versfeld Stadium.

“You cannot be satisfied that now you have qualified in the group. If you lose those two matches, physiologically, it might have an impact because you have started losing.

“You have allowed possibilities to people to see that you can also lose. And you are bringing a little bit of panic to the team. If you can still win, go for it, I’m the worst guy when we lose matches. People who work with me know that.”

The 49-year-old coach added that for Sundowns to have qualified for the quarterfinals, it is something that should not be celebrated, as they have been doing it.

He also highlighted the importance of picking points early in both the Champions League and DStv Premiership, where they are also first on the log table.

“Knowing that this season it is tight, if you were to look at our last league matches in May, you will realise that it requires that whatever we do is quicker to give ourselves a little bit of breather,” he said.

“Even in the league, it would be nice to arrive in the last five matches not looking for many points because, at that time, it is going to be very tight for us.”

Meanwhile, with Thlopie Motsepe to succeed his father Patrice as the new man in charge of Sundowns, Mngqithi said they would support him to make sure he is successful.

“The least I can tell you is that this is one of the best decisions that a father can take. Thlopie is a very good boy. Very intelligent, very humble, and for me, there is no chance that he would fail.

“He also has us as adults to assist him because he is humble. It is easier for him to ask for all the right information that can make him a top leader."

“Honestly speaking, I’m looking forward to seeing him taking charge because we know what he is capable of. Fortunately, he has been working with us on many other projects within the team.”

Mamelodi Sundowns confirmed their place in the CAF Champions League quarterfinals with two games to spare as their incredible winning run continued ...
Sport
1 year ago

Mngqithi on his new boss at Sundowns: 'this is one of the best decisions that a father can take'

Mamelodi Sundowns' chairman Tlhopane Motsepe has assumed the reins at Chloorkop and coach Manqoba Mngqithi has described his new boss as a ...
Sport
1 year ago
Next Article