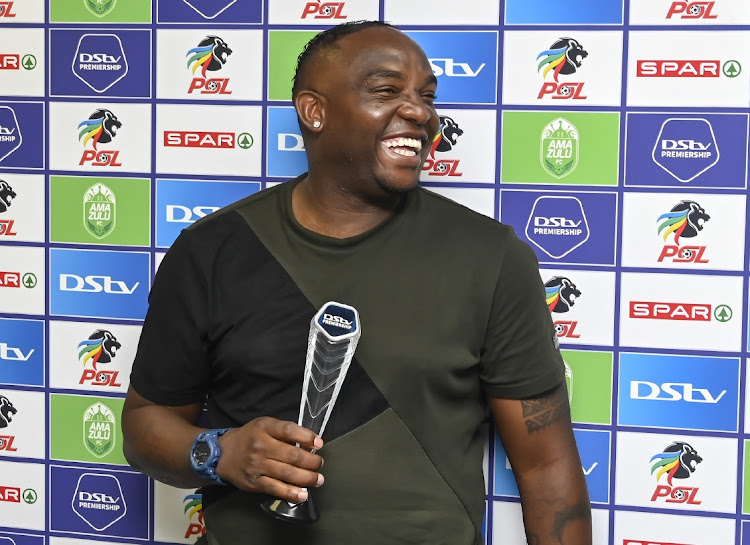 Benni mcCarthy, Coach of AmaZulu FC receives his award as Coach of the Month during the DStv Premiership 2020/21 Monthly Awards on the 08 March 2020.
Image: Gerhard Duraan/BackpagePix

AmaZulu coach and Bafana Bafana great Benni McCarthy has commiserated with a number of players he feels they're worthy to be in the national team.

Speaking in a virtual media conference after accepting his Coach of the Month gong for January/February yesterday, McCarthy named his ex-charges at Cape Town City in Thabo Nodada, Taariq Fielies Gift Links, alongside Mduduzi Mdantsane, who only joined City after he’d left, as players he reckons should have made the squad that will face Ghana and Sudan in the final two 2022 Africa Cup of Nations (Afcon) qualifiers later this month.

“Gift Links [who’s now on the books of Danish top-flight side Aarhus GF], I follow European football and he’s a player who’s doing very well. He’s playing at his club, scoring goals. I am not a national team coach, that’s just my opinion. You have the likes of Taariq Fielies, a central defender who’s been superb, [but] not in the squad.’’

The retired striker added he’d have loved to see more Swallows players in the team. The Birds have only Ruzaigh Gamildien in the squad. “There’re a few players at Swallows, they’ve done really well. Some of the players could feel hard done by not being called up,’’ McCarthy noted.

McCarthy insinuated national team selectors’ criteria should be current form. The Usuthu trainer highlighted he expects players who are in-form, but got overlooked in favour of fringe experienced campaigners, to be disappointed.

“I think as a player – by itself – it is disappointing that when you know you’re doing everything you can, you’re playing your heart out, you’re giving your best, you’re working hard and your form is picking up and then there are players who don’t play at their clubs and they get selected ahead of you, of course there’s a sense of disappointment as a player.’’

McCarthy’s troop Tapelo Xoki scooped the Goal of the Month accolade for his stellar last-gasp free-kick in their 4-3 win over Bloemfontein Celtic early last month.

Ntseki: Rangers are playing Bongani Zungu‚ so Bafana have no problem picking him

Bongani Zungu has been cleared to play‚ and even made two substitute’s appearances‚ for his club Rangers since his Covid-19 regulation transgression ...
Sport
9 months ago

All eyes will be on Bafana Bafana coach Molefi Ntseki when he announces the squad to face Ghana and Sudan in two crucial 2022 Africa Cup of Nations ...
Sport
9 months ago
Next Article