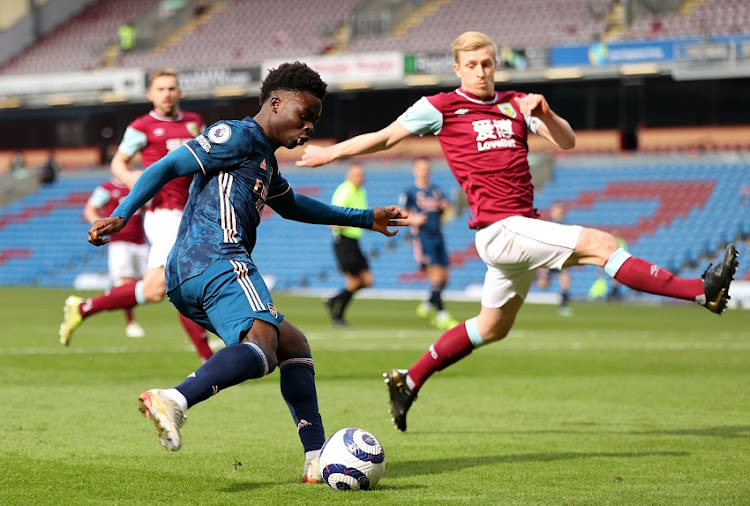 Mikel Arteta's side looked comfortably in charge of the game until a shocking mistake six minutes before the break.
Image: TWITTER/ARSENAL

A dreadful defensive error from Arsenal's Granit Xhaka gifted Burnley an equaliser as the sides drew 1-1 at Turf Moor in the Premier League on Saturday.

The Gunners had taken a sixth minute lead when Willian ran at Burnley defence and fed Pierre-Emerick Aubameyang, whose low shot snuck in at the near post despite Burnley keeper Nick Pope getting a hand to the ball.

Mikel Arteta's side looked comfortably in charge of the game until a shocking mistake six minutes before the break.

Arsenal attempted to play the ball out from the back with keeper Bernd Leno passing to Xhaka deep in the penalty area, but the Swiss international's attempted pass to David Luiz struck Clarets striker Chris Wood and ricocheted into the net.

The North Londoners struggled to put Burnley under pressure after the interval, with Arteta eventually turning to Nicolas Pepe and Alexandre Lacazette to liven up his attack.

Arsenal felt they should have had a penalty when the ball struck the arm of Burnley's Erik Pieters in the box but shortly after the Dutchman went close to putting his side ahead with a volley that Leno did well to tip over the bar.

Leno was in action again when Matej Vydra slipped the ball across the box to Wood, but the striker's shot was superbly kept out by the diving German keeper.

Pepe missed a good opportunity at the other end and was then involved in some VAR drama when referee Andre Marriner awarded a penalty and sent off Pieters for handball as he cleared a goalbound Pepe shot.

Both decisions were then overturned by VAR after replays showed Pieters had chested the ball.

An unfortunate afternoon for Arteta's 10th-placed side concluded when Dani Ceballos' fierce drive in stoppage time rattled against the bar. Burnley remain in 15th place.