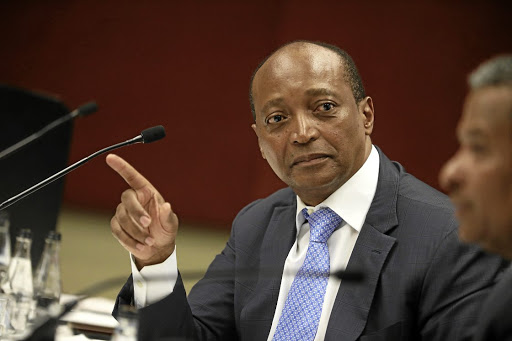 Patrice Motsepe is in the running to take over the presidency of African football from Ahmad Ahmad, who was handed the ban last November for corruption, which was lifted while he appealed to the Court of Arbitration for Sport.
Image: Thulani Mbele/Sowetan

A decision on the appeal against a five-year ban by Confederation of African Football president Ahmad Ahmad is expected by Monday, but the path now looks clear for billionaire Patrice Motsepe to replace him.

Ahmad was handed the ban last November for corruption, but it was lifted while he appealed to the Swiss-based Court of Arbitration for Sport.

They heard his appeal on Tuesday and Wednesday and will deliver their verdict by Monday, sources have told Reuters, five day before CAF’s presidential election.

If the appeal were to be upheld, Ahmad would likely be allowed to stand for re-election at the CAF Congress in Rabat.

But the race to replace him dramatically narrowed on Friday after an agreement brokered by FIFA present Gianni Infantino, who spent a fortnight crisscrossing Africa to forge the deal.

In an arrangement reached with the four candidates seeking to replace Ahmad, Motsepe - one of the richest men in Africa - would take over the presidency with Augustin Senghor and Ahmed Yahya, two of his opponents, to be appointed vice presidents.

The Senegalese candidate for the Caf presidency, Augustin Senghor, has officially withdrawn from the race and pledged his support to South Africa’s ...
Sport
1 year ago

Senghor is president of Senegal’s football federation and Yahya heads the federation in Mauritania. Motsepe owns Mamelodi Sundowns, but has no previous experience in football politics.

"We have decided to accept the proposal submitted to us by FIFA in the name of the best interests of the unity of African football," Senghor said in a statement, detailing the agreement.

Former FIFA executive committee member Jacques Anouma, who was a fringe candidate, withdrew on Friday, telling Ivorian radio: "After several reflections and consultations, I decided to abandon my candidacy."

Yahya has not yet announced his withdrawal, but it is expected to follow in the next few days, almost certainly leaving Motsepe, 59, to be elected unopposed at the congress on Friday.

"The withdrawal of my candidacy in favour of another candidate will not be approved by all, of this I am aware. But I think it's a good decision, the right decision," added Senghor, whose said in his statement that the manifesto of all four candidates would serve as a roadmap for the future of the African game.

Publicity-shy Motsepe, who made his fortune in mining and is the brother-in-law of president Cyril Ramaphosa, is seen as a leader with the potential to lift African football out of a spiral of controversy and into a new commercial era.

There's no better candidate for the presidency of CAF than Dr Patrice Motsepe. Motsepe presses all the right buttons to lead the sleeping giant of ...
Opinion
1 year ago

Patrice Motsepe has proposed to appoint the right people‚ bring corporate governance‚ use his international business contacts to conclude deals‚ and ...
Sport
1 year ago

Mamelodi Sundowns will be run by Patrice Motsepe’s oldest son‚ Tlhopie Motsepe‚ as chairman of the club if his father is successful in the ...
Sport
1 year ago
Next Article