Coach turns focus to next game against TTM

Birds' first loss a bitter pill to swallow for Truter 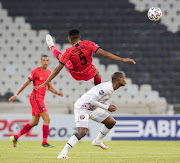 Image: Dirk Kotze/BackpagePix Given Msimango of TS Galaxy FC during the DStv Premiership 2020/21 game between TS Galaxy and Swallows FC at Mbombela Stadium on 2 March 2021.

Two moments of madness in a space of five minutes led to Swallows' first Premiership defeat of the season, according to their head coach Brandon Truter.

It took 16 matches for the Birds to lose their first DStv Premiership game and fellow newcomers TS Galaxy have the honour of being the first team to defeat the Soweto-based side in the top-flight division.

Galaxy are enjoying a revival under the guidance of veteran tactician Owen da Gama, who succeeded where many coaches failed. Swallows' leading goal-scorer with 10 goals, Ruzaigh Gamildien, converted a 50th-minute penalty to open the scoring for the visitors.

However, late goals by Lindokuhle Mbatha and Bevan Fransman in the 84th and 87th minutes saw the Birds drop three points for the first time this season. Truter's men had never lost a league game since March last year. Their last defeat was in the GladAfrica Championship against the University of Pretoria.

However, the Birds are winless in their past six league meetings with five draws and one defeat. “We were in control for 85 minutes and then they put us under pressure by putting four to five players upfront. They scored via a deflection and the other one was a set-piece. Two moments of madness in five minutes and we got punished," said Truter.

Nevertheless, the soft-spoken coach said he is proud of his boys for maintaining their unbeaten run for 16 matches. “Two individual moments where we switched off cost us our unbeaten run," he said.

“It’s almost exactly a year since we lost our last league game. It is a wake-up call and we look forward to our next league game against Tshakhuma Tsha Madzivhandila; we want to avenge our Nedbank Cup defeat against them. The boys are a bit down, but I will pick them up," added Truter.

Da Gama said he is proud of his team as they occupy eighth place on the log. “We did it against all odds and came back from a goal down to clinch the victory. Nobody can take away our fighting spirit," said Da Gama.