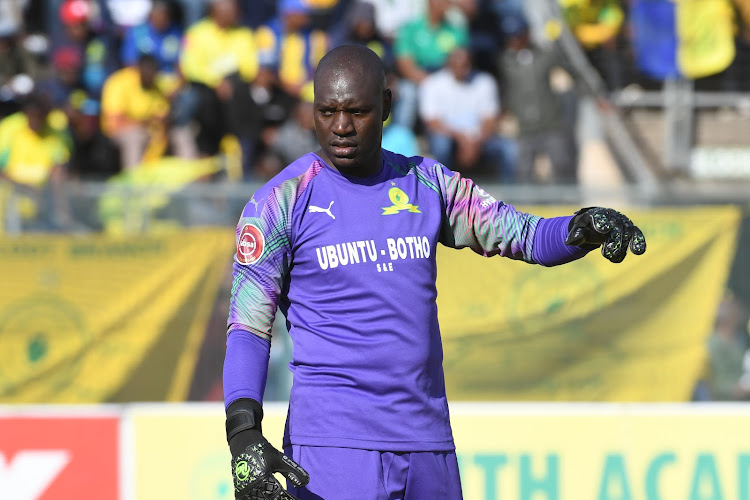 Denis Onyango is a vital cog in the Mamelodi Sundowns back line.
Image: Lee Warren/Gallo Images

Denis Onyango hobbled off with an ankle injury in Mamelodi Sundowns’ crushing win over Algerian side CR Belouizdad in a Caf Champions League group match played in Tanzania at the weekend‚ but co-coach Manqoba Mngqithi is confident the goalkeeper’s knock is not a serious one.

The Ugandan keeper‚ who is vital to the Sundowns defence‚ had his ankle stamped on by Belouizdad attacker Amir Sayoud when chipping over the ball for the consolation goal as Mngqithi’s side ran out 5-1 winners.

Onyango’s substitution before the second half would have been worrying for Sundowns but Mngqithi allayed any fears and said the first-choice goalkeeper was merely bruised.

“We don’t think it is a very difficult or very serious injury because it’s just a bruise‚” said Mngqithi.

"So we are hopeful that in the next coming days‚ because we will have some days after this match‚ before next match he will be able to help us.

“We don’t think it is a serious injury. When I saw him walking on the pitch after the game I felt a little bit better.”

Onyango was replaced by Kennedy Mweene and Mngqithi said the Zambian keeper is a worthy replacement.

“We are hopeful that he will be back soon but one must also say that we have Kennedy Mweene who is experienced and plugged the whole gap when Denis was injured‚ and it never looked like we were shaking‚” said Mngqithi.

Sundowns have left the Tanzanian capital Dar es Salaam and are now faced with a daunting trip to Lubumbashi in the DR Congo to confront five-time winners TP Mazembe on Saturday.

The Brazilians are on six points after two matches and lead Mazembe by a healthy four points ahead of the gigantic clash at Stade TP Mazembe.

The DR Congo giants are struggling somewhat and have not scored in their last two encounters against Al Hilal in Omdurman in the Champions League last week‚ and against FC Saint-Éloi Lupopo in the derby at the weekend.

They have won just twice in their last five matches in all competitions‚ which includes three goalless draws‚ but they are still top of the 16-team DR Congo Ligue 1 on 36 points from 16 matches and lead second placed Vita Club by a point.

Sundowns have not yet engaged the media on their travel plans and their chances of getting a result in Lubumbashi but Mazembe’s struggles of late will give them confidence.