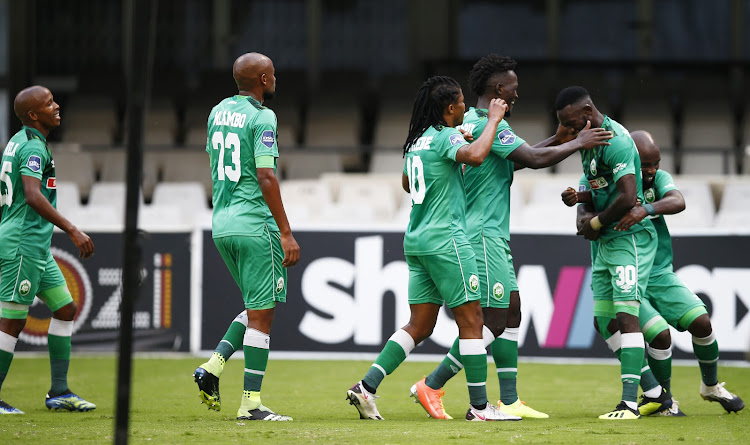 AmaZulu players celebrate with Sphelele Mthembu after scoring the only goal of the match.
Image: Steve Haag/BackpagePix

AmaZulu continued with their recent rich vein of form by defeating SuperSport United 1-0 during their lively DStv Premiership encounter at Kings Park Stadium in Durban on Tuesday.

With this hard fought win, Usuthu are on an impressive eight match unbeaten run, which includes five wins and three draws, as they continue to impress under the guidance of coach Benni McCarthy.

AmaZulu are equal on 28 points with their neighbours Golden Arrows who are sitting above them on fifth spot on the log but they have played two more matches than Abafana Bes'thende.

For United and coach Kaitano Tembo they have missed an opportunity of drawing level on points with log-leaders Mamelodi Sundowns at the top of the log with this loss.

United have also allowed Orlando Pirates to narrow the gap on them to just one point with both teams having played 19 games and they have gone three matches without a win.

AmaZulu opened the scoring after 25 minutes through Sphelele Mthembu when he found the back of the net with a tap-in after the United defence failed to stop Augustine Mulenga’s surging run into the penalty box.

For the opener, United defender Thatayaone Dithlokwe misplaced his pass on the path of advancing Mulenga who got the better of Teboho Mokoena and Luke Fleurs before he laid the ball for Mthembu to score his second of the season.

United reacted to the goal with two quick attacks on the AmaZulu defence through attackers Bradley Grobler and Guilly Manziba but they did not test goalkeeper Veli Mothwa.

Whenever they arrived in the AmaZulu half, Grobler, Manziba and Ghampani Lungu were met with resistance by defenders Mbongeni Gumede, Thapelo Xoki and Sibusiso Mabiliso.

AmaZulu came back from the break with more purpose in their work as they started to attack United immediately with Mulenga, Mthembu and Siyetemba Sithebe causing most of the problems.

Despite the relentless AmaZulu attacks, the United defence, that was marshaled by Luke Fleurs, Dithlokwe, Grant Kekana and Onismor Bhasera, stood firm to dent them the second goal.

Mthembu missed a glorious opportunity to increase their lead after 75 minutes when he failed to connect with a cross from Thembela Sikhakhane from close range.

Due to the short turnaround of matches, United return to action against TS Galaxy on Friday while AmaZulu have an advantage as they only return to league action on Chippa United next week Wednesday.