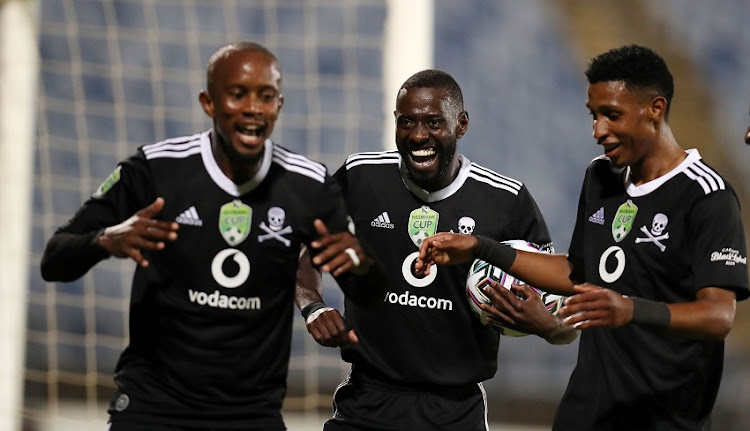 Orlando Pirates put together a tour de force second-half performance fighting back from a goal down and blowing Maritzburg United off the Harry Gwala Stadium.
Image: TWITTER/ORLANDO PIRATES

Orlando Pirates put together a tour de force second-half performance fighting back from a goal down and blowing Maritzburg United off the Harry Gwala Stadium pitch 3-1 in Saturday night's Nedbank Cup last-16 thriller.

Thabiso Kutumela struck Maritzburg ahead in the ninth minute. A lightning double strike for Pirates in the 56th and 57th, by substitute Kabelo Dlamini and Deon Hotto, put Bucs ahead, Vincent Pule banging in a third in the 78th.

Maritzburg coach Ernst Middendorp made six changes from his battling team's 1-0 home loss on February 12 against Tshakhuma Tsha Madzivhandila in the league, where they are in last place, including a debut at left-back for Cameron Carnell, 18-year-old nephew of ex-Bafana Bafana fullback Bradley.

Middendorp had out a line-up that could play at an aggressive tempo in the middle, and run hard up-front.

For Pirates it was a rare single change from Josef Zinnbauer following a league and cup run of four wins and a draw, Linda Mtambo replacing injured Thembinkosi Lorch at deep striker.

This season's MTN8 winners Bucs showed the mettle of cup contenders fighting back with a dominant second half against a team spoiling for a fight.

When these two teams meet at Harry Gwala it can be an exciting match-up. Saturday evening's contest was fast-paced and end-to-end.

United, winger Sibusiso Hlubi troubling Bucs, edged chances in the first half, Pirates making their own task harder with unforced errors. The home team had two clear chances, one converted, inside the opening 10 minutes.

Bucs left-back Paseka Mako's stray header across his box saw Hlubi in, Richard Ofori having to come out of his area and intercept. The goalkeeper attempted to shield rather than clear, allowing Bongokuhle Hlongwane to steal the ball, and Kutumela to lob into an exposed goal from 25 metres.

Just past 10 minutes from the restart Bucs struck twice.  From a throw-in the ball was lobbed up to Hotto on the edge of the area, who teed up Dlamini, the substitute's strike taking a small deflection and beating Ofori.

Seconds past the kickoff the ball was worked across the halfway line and Fortune Makaringe's throughpass was perfect for the run of Mntambo, who played the ball across the face, Hotto sliding in to finish.

Bucs secured the result with an emphatic third, Dlamini's skidding shot parried by Engelhardt and Pule banging in the rebound.